Mobvoi just unveiled the TicWatch C2, a sequel to the TicWatch 2. It’s a Wear OS timepiece that includes most of the features you might want from a smartwatch while keeping the price in check. You can pre-order it right now at $200/€200, it will ship on December 6.

It’s a stainless steel case, by the way that measures 13.1mm or 12.8mm. The Rose Gold version is the slimmer one and it also uses 18mm straps. The other two colors, Black and Platinum, use 20mm straps. In both cases, the straps are made of genuine leather.

The watch has a built in GPS receiver, a heart rate monitor, as well as NFC for use with Google Pay. Some of these usually get cut to meet such a low price tag. The one thing it doesn’t do is go in the pool – the watch is IP68 waterproof, but that’s not enough for swimming. The Huawei Watch GT is rated up to 5ATM and costs the same, but runs a proprietary OS.

The Snapdragon Wear 2100 chipset is now quite old, but basically all other Wear OS watches use it too (save for this $1,000 luxury offering). The 400mAh battery still promises 36-hours of use, which is par for the course.

The Mobvoi TicWatch C2 supports Spotify, so you may want a good pair of headphones to go with it. The company unveiled the TicPods Free truly wireless earbuds. They have 18 hour battery life and support fast charging (15 minutes gets you nearly an hour and a half of play time). The earbuds are rated at IPX5, so you shouldn’t be afraid of working up a sweat.

The TicPods Free support touch gestures, one of which summons your phone’s assistant – be it Siri or Google. 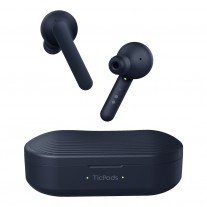 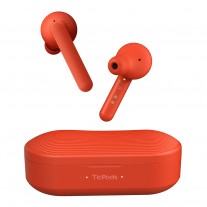 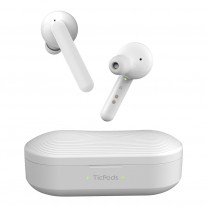 Will the screen show a clock if I twist my wrist to see the time?

Of course, I totally agree with you, but if I had to choose between a two year old chipset and a relatively new one, I would go for the new one due to the optimisations - even if they are extremely small, in this case. Qualcomm must show up a ne...