More details about the Samsung Galaxy A3 and A7 surface

The members in Samsung's soon to be unveiled A series of smartphones have been leaking a lot lately, and today is no different. While we already know pretty much everything about the mid-level model in this line, the Galaxy A5 (and we've even seen it in pictures), things are different when it comes to the Galaxy A3 and A7.

As the former of those has been certified in China by TENAA (which is that country's equivalent of the US FCC), we once again get a list of its specs. The first time this happened was thanks to a user agent profile. 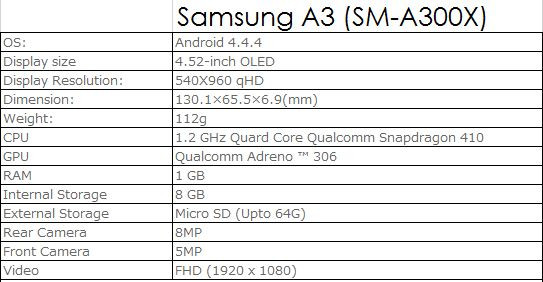 This time around though, we get a more comprehensive idea of what to expect from the handset. As you can see, this will be a lower-midrange offering, sporting a 4.52-inch AMOLED touchscreen with 540x960 resolution, an 8 MP rear camera, and a 5 MP selfie snapper.

Moving on to the Galaxy A7, this is going to feature a 5.5-inch touchscreen (resolution still unknown). This has been revealed thanks to a new listing from an Indian import-export tracker. This makes sense based on the monikers of these three devices, since the A3 has a 4.5-inch screen and the A5 makes do with a 5" panel.

Unfortunately though, the Galaxy A7 is the one we still have the least details on, but that situation should change soon, based on how many leaks we've already seen. Keep in mind however that the A7 may not be sold in all markets where the other two will be present, if we go by a rumor from a couple of days ago.

Galaxy S3 I9300 didn't receive KitKat because 1GB of ram is not enough yet alpha series somehow manage to support the latest android despite of the same amount of RAM. Lies, lies, lies!

1gb of ram with Android 4.4.4 And S3 the international version is left behind