Last week, Honor shared some samples showing off the Honor 20 Pro’s camera capabilities and revealed that the camera was going to feature an f/1.4 aperture lens for the first time on smartphone. The first samples shared showed off the new AIS Super Night mode that is debuting with the 20 Pro.

Some more camera samples have surfaced on Weibo and have been reposted to Twitter and Instagram by Bang Gogo. We are getting a glimpse of how far the Honor 20 Pro will be able to zoom. Of course, it will be difficult to judge real image quality since the photos were compressed in the process of being uploaded to these platforms.

Based on these sample photos, we’re expecting a lot from the Honor 20 Pro’s camera. The images show excellent dynamic range so they should be able to capture drastically different exposures in the same scene.

We're excited to get our hands-on the 20 Pro to check out the camera's capabilities for ourselves.

The Honor 20 Pro has a quad-camera setup – which was initially believed to be similar to the P30 Pro's with its 10X periscope zoom camera, but a more recent leak revealed this wasn't the case. 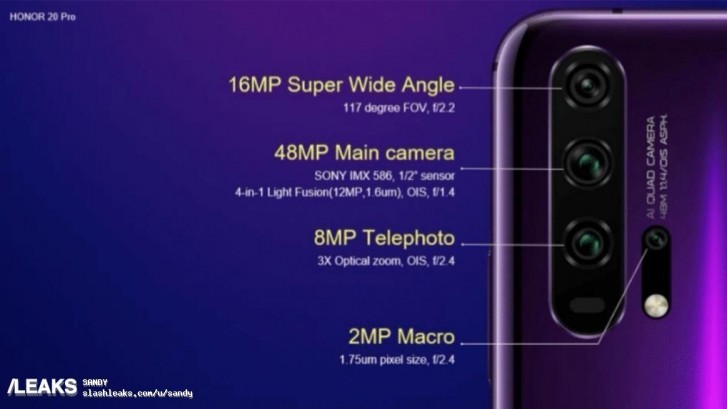 The Honor 20 Pro will be announced on Tuesday, May 21 at a launch event in London. Despite the swirling news of Google revoking Huawei’s Android license, the Honor View 20 will reportedly still receive security updates and will run Google Play Services.

Too late, huawei. Nobody in the EU wants your devices. Nobody educated and/or tech savvy that is.

Ever heard the term "The cake is a lie"? Well, here the ban is a lie instead. Huawei ain't going nowhere. This BS will end sooner rather than later. The Chinese president just needs to have a chat with the Orange Buffoon.