We are less than 24 hours away from the official announcement of the Nokia 800 Sun (or Lumia if you will), so what could be better than a few leaked photos to warm things up. That's exactly what we got as a couple of live shots of the pink version of the WP Mango-running smartphone surfaced.

Obviously, the Nokia 800 Sun will not only borrow the design of the Nokia N9, but the color versions too. Just like its sibling, the Sun will come in black, blue and pink and it should also feature the same non-painted color polycarbonate unibody, which handles scratches greatly.

The only design differences between the Nokia Windows Phone and MeeGo flagships remain the shutter key and the three capacitive touch buttons on the front that the Nokia 800 has.

Another interesting detail that popped up along those Nokia 800 photos is the schedule for the Nokia World event, which starts tomorrow. It says that attendees will get two chances to spend some time with the company's "latest mobile products". Notice the 'S' - it points to multiple new products being unveiled, which aligns nicely with previous rumors. 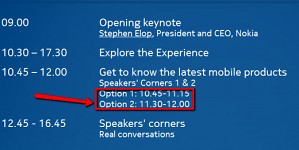 Right now we'd say Nokia 800 Sun and the Nokia Sabre (under a different name, perhaps) seem like the most likely starts of the upcoming show, but who knows - Nokia might have another device for us, as well.

Anyway, we'll be on site, covering the whole thing live for you so stay tuned. Nokia World kicks off tomorrow at 9 AM UK time.

nokia should go android because WP OS can not fulfill its hunger of creativity.

I am an iPhone fan, but love smartphone tech in general. This Nokia is simply a stunning design, and am glad that Nokia retained it. It should be a template for future designs hopefully. I also like the design of the new Motorola Razr. Original ...