Most interesting news stories of 2015: Q2

With both major events on the calendar falling in the first quarter, the April to June period was a quieter time. The most read story was the announcement of the Lenovo K80 – an Intel Atom-powered 5.5-inch phablet with 4GB of RAM and a 4,000mAh battery. Oddly enough, it was also the last time we heard of the K80.

Nokia made the news despite not being an actual player in the smartphone world. Or thanks to that, as every time word got out on its return, you flocked to read the details.

Yu only made it to the third spot this quarter with the launch of its second smartphone, the Yuphoria. The announcement of the Xiaomi’s Mi 4i was another top read, in the absence of a Mi 5. 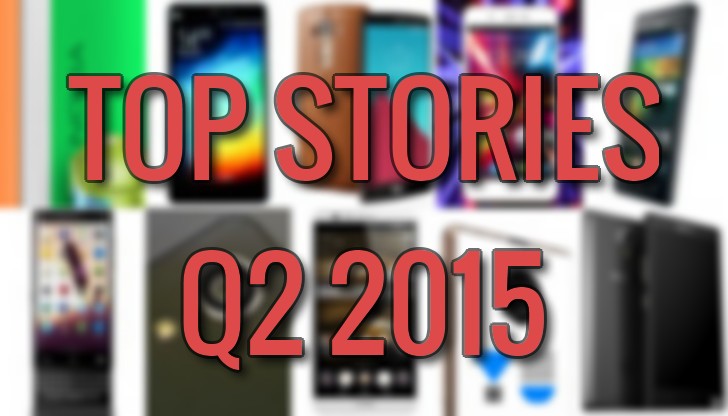 An alleged Sony Xperia P2 leak caused the Internet to explode, but the device never really materialized, and in hindsight it was likely just someone’s vision of the perfect Sony smartphone. Instead, Sony’s interim flagship Xperia Z3+ launched in Japan, carrying a Z4 badge.

A couple of weeks before its announcement, the LG G4 was leaked in full glory making for one of our top Q2 stories. Perhaps that’s why you don’t see the actual unveiling in the list below.

It was around this time that we first heard of the BlackBerry Priv. BlackBerry’s first Android device first showed up on April 27, but no one was talking about Android just yet, and neither did the screenshots suggest such a development.

There was the obligatory Lollipop update buzz too, with the Samsung Galaxy A7 leading the way. The Xperia Z-series started getting Android 5.0 during this period too. You were also queuing up to read what Google had in store for you with Marshmallow, at the time only known as Android M.

This comes a few months after Asus announced the ZenFone 2, the world's first smartphone with 4GB RAM.

The Finnish company won't be directly producing them, instead choosing to license its brand to partners.

The Chinese company unveiled its latest flagship today and it packs lots of bang for your buck.

The phone will be offered via flash sales exclusively on Snapdeal from April 29.

A massive battery too, a whopping 4,240mAh . The camera is rumored to have large pixels and OIS.

This smartphone shares all of its specs with the Honor 4C, but has a slightly different design.

Samsung began seeding Android 5.0.2 Lollipop on Galaxy A7, Russia is the first to get it.

LG G4 gets revealed ahead of its scheduled debut

A product page of the smartphone with a number of official images and specs went live for several hours.

Huawei devices to start getting Lollipop next month

The Lollipop update wrapped in Emotion UI roll out plan pans out from May to September.

The next flagship tablet by Samsung will come in two variants - SM-P355C and SM-T355C.

As it promised last week, Sony has now started the rollout of the update for these devices.

Nokia to make Android phones in 2016, R&D moves to China

The Nokia China president confirmed that the company plans to re-enter the smartphone business in 2016.

Sporting the model number E6553, the successor of Sony Xperia Z3 will debut this summer.

YU to launch Yuphoria on May 12 in India

i like android m but little bit missing in design