Most interesting news stories of 2016: Q1

Everyone say "ahoy" to the new 2017, which we hope to be as interesting to the last one. Now is a great time to remind ourselves what 2016 brought. Just as last year, we'll do it chronologically, starting with the most interesting stories from the first quarter of 2016. 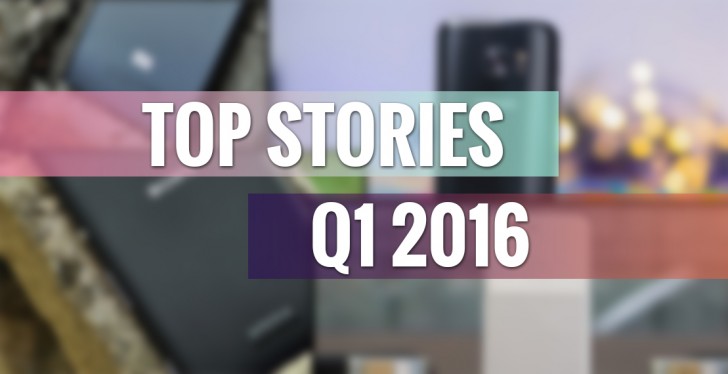 There's no denying 2016 was eventful in the mobile industry. Companies large and small managed to charm and disappoint. Whatever the case, though, smartphone launches were abundant. It's not surprising then, that that's exactly the type of news that was most interesting to our readers.

The top of the list is taken by the Freedom 251 - the $4 smartphone from India that seemed too good to be true and actually was. For that price customers were supposed to get a quad-core CPU, 4" qHD display and 1,450mAh with Android Lollipop.

Naturally, the Galaxy S7 and Galaxy S7 edge got a lot of reader attention on GSMArena. The battery life and performance were of great interest. Samsung didn't disappoint with those, as our tests confirmed.

Xiaomi, vivo and LeEco also gathered a lot of interest with their respective devices. They offered extraordinary value for your money and the market naturally had an overwhelmingly positive response.

India's Ringing Bells has unveiled what is being touted as the country's most affordable smartphone.

Back in November, Xiaomi announced the Redmi Note 3 and the newer model rocks a Qualcomm Snapdragon 650 with a 64-bit 1.8GHz hexa-core CPU, Adreno 510 GPU, integrated X8 LTE with Cat 7 speeds and support for VoLTE.

The device is powered by Qualcomm Snapdragon 616 chipset, and sports a 5-inch 720P HD display.

This is the official list as of the start of 2016, though not that some of these updates won't roll out for several months (and some are already available).

No matter the chipset, battery capacity of the Galaxy S7 edge is fixed at 3,600mAh - a generous amount. It is also a substantial increase over the S6 edge's 2,600mAh, not to mention the S6 edge+

After several leaks, the Samsung Galaxy J7 (2016) and Galaxy J5 (2016) have finally been made official. Both devices are now listed on the South Korean company's China website.

Sony kept it short and sweet - it launched a new phone line, the Xperia X, and the first three phones in it. Meet the Xperia X, XA and X Performance.

Apple iPhone SE official with 4" display and A9 chip

The phone features a body almost identical to the iPhone 5 and 5s, but features the latest gen Apple A9 chip with a dual-core 1.85 GHz Twister processor

Burning of Note 7 $4 Cell phone in India.. The biggest one to me