The Moto G8 Play leaked in some official-looking renders less than 24 hours ago, but what if you want an even better idea of what it looks like? For that, there are now a couple of leaked hands-on images of the yet-unannounced device to keep your interest level peaked. Here they are for your viewing pleasure. 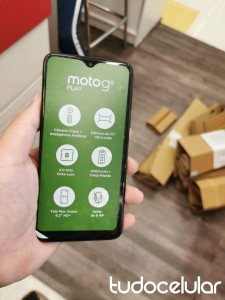 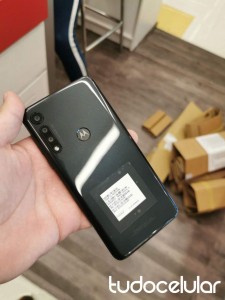 The G8 Play should become official in Brazil (where these pictures originate) very soon, apparently as soon as next week. But obviously someone in the country has already obtained a unit, and decided to share its looks with the world.

As the previously leaked renders also showed, the Moto G8 Play has triple rear cameras, in two separate islands of which one houses two snappers and the LED flash, and the other is home to the third shooter. It's a rather unique design, and one of the cameras is an ultrawide with a 117-degree field-of-view. The fingerprint reader is on the back inside the Motorola logo.

On the front the 6.2" HD+ screen has a waterdrop notch and a substantial bottom bezel. The phone will be powered by an unnamed (but probably MediaTek-made) 2 GHz octa-core processor, and it will have a 4,000 mAh battery.

According to past rumors, it should get official on October 24 alongside the Moto G8 Plus, and retail in Brazil for BRL 1,099 (that's $264 or €237 at the current exchange rates, but prices elsewhere are likely to be lower).

The third "camera" isn't a camera, it's laser focusing.

moto makes some beautifully wide phones. hope this one is no different.

I'll keep an eye on the G8 Plus although i don't like what i've seen in the leaks of the G8 Plus... at least for now :/ So i'm ready to choose other brand now. Probably the Oppo Reno Ace.