A Motorola phone with the confounding name of "Moto G8 Power Lite" leaked earlier this month when Roland Quandt posted renders of the phone. Now the Google Play Console has confirmed that the phone is very much real, though it looks different.

Only the front is visible, showing that the selfie camera is placed inside a notch instead of a punch hole. It's not clear what this means for the camera on the back - Quandt's renders showed a triple cam (with ultrawide angle and macro cameras). 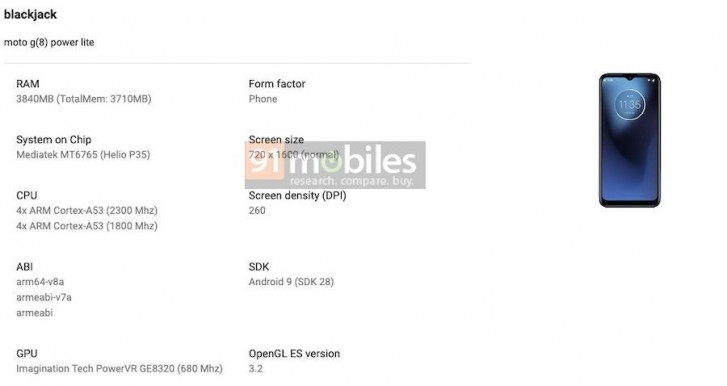 The Play Console confirms other specs - like the Helio P35 chipset (eight A53 cores), 4GB of RAM and old version of Android (9.0 Pie). The screen has 720p+ resolution, but the size of its diagonal is unknown (could be larger than the 6.4" panel on the Moto G8 Power, if the DPI reading is to be believed).

The Moto G8 Power Lite (XT2055-1) was certified by the FCC, which revealed that the battery capacity is 5,000mAh, matching the full-blooded Moto G8 Power. We don't know when Motorola will make it official, but it can't be long now.

With Helio P35 processor, if the smartphone comes under 10k in India, it would be really good for budget buyers.

Looks good enough with Mediatek helio P35 processor but the Android processor could have been updated for better impression.