This iteration of the company's best selling smartphone ever was launched in July, and as is usual for the G line it pairs a decent price with decent specs. 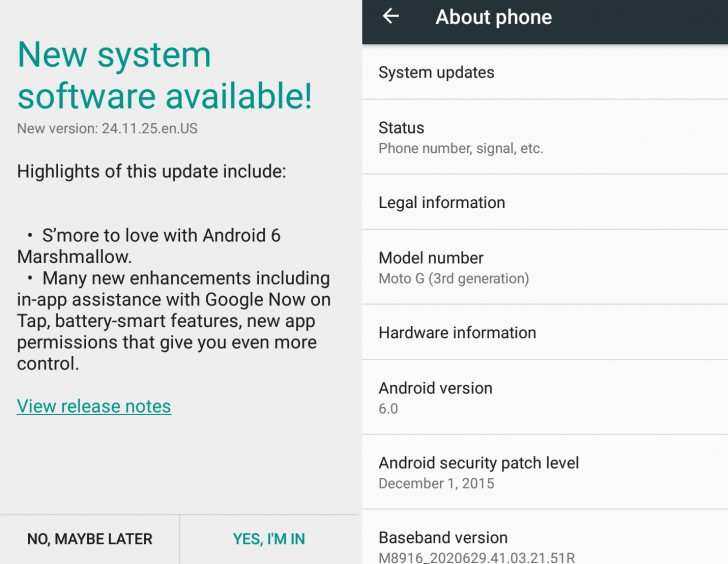 The update is rolling out over-the-air in the US and Canada, currently only for handsets purchased unlocked and SIM-free. That said, the Marshmallow release is bound to spread to other versions of the 3rd gen Moto G soon.

If you own a Moto G (3rd gen) and get the update notification, you are apparently looking at a 2GB download, so it's probably best if you grab it via Wi-Fi. After applying it, you'll be on software version 24.11.25.en.US.

The update incorporates Google's security patches created up to December 1, and it obviously contains everything that's new in Android 6.0, including Now On Tap and the revamped permissions system. As previously announced, Motorola is also removing its Migrate and Assist apps in this version.

my moto G3 switched off on its own and i thought it is because of low battery but the moment i switched it on, it iasked me which language and followed by terms nd their acceptance and asked for gmail login. i logged in and even then it is not funct...

Just fixed the issue with Moto g3 - Not receiving any incoming call and no notification. Steps Followed: - Ensure you have full back up, as you are heading towards factory data reset - Press Power key + Volume down key-> navigate to recovery...