This year's Motorola flagship smartphone is clearly already in development, and now it looks like someone in possession of a prototype decided to run Geekbench on it. Hence, the benchmark's online database now lists the Motorola XT1650.

What's most likely hiding behind that model number is the successor to the Moto X Style / Moto X Pure Edition from 2015 - this year's Moto X iteration. 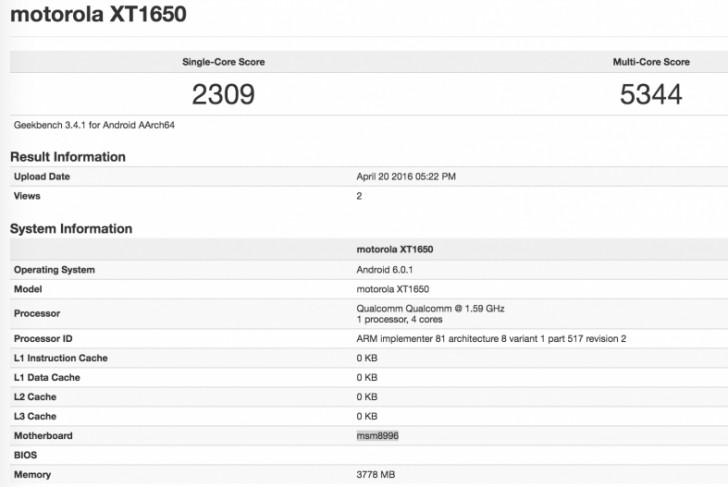 The handset rocks 4GB of RAM and it's powered by Qualcomm's Snapdragon 820 SoC, as you'd expect from a high-end offering. The prototype in question unsurprisingly runs Android 6.0.1 Marshmallow.

The scores it's received are in line with what we've seen for other handsets sporting the Snapdragon 820, so no surprises there. The phone could become official on June 9, at an event that's already been confirmed by Lenovo's CEO. It may even launch running Android N, since Google is reportedly going to release its new OS iteration sooner this year.

actually its a good idea on the back, but wanna know, its a good idea to put it on the powet button like sony smartphones. Though they are thick, thays why probably sony put it on power button. But placement is very good too, and looks better than on...

then why did they almost stopped/decided to stop their operation in India before moto g. because they thought it is not a profitable market. again why did they?.

It will. Lenovo announced that every moto phones this year will