The upcoming smartphone from the Google-owned Motorola is one of the worst kept secrets in the tech world. The device has been leaked numerous times ahead of its announcement. We have also seen the official press renders of the Moto X and let's not forget the leaked hands-on video, which guided us through the user interface.

Moto X was seen in public for the first time in the hands of Eric Schmidt, the Google's Executive Chairman. Now, however we get to see the device in its Neon Green paint job at what seems to be a corporate party. 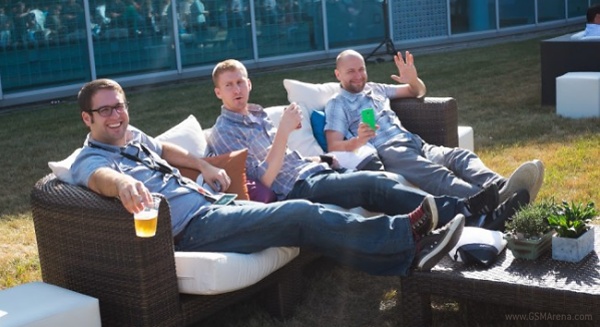 The upcoming Moto X will sport a 4.7-inch 720p display and is powered by a dual-core 1.7 GHz processor. The smartphone also features a 10.5 megapixel rear camera, 2.1 megapixel front camera, 2 GB of RAM, 16 GB of internal memory and runs on Android 4.3 Jelly Bean.

Moto X is also rumored to be available in light blue, red, purple color variant along with the Black, White and the Neon Green paint job, which have already been leaked. We will know more about the device in the two days, when Motorola officially announces it.

Stay tuned to our website as we will be bring you all the latest news from the event live.

"leaked". the most irritating word when it comes to tech world. moto x has medoicre specs at it's best, so no matter how much they spam the news section with it, it's not gonna sell if overpriced, is all.

Never? Even if this Moto X is the Nexus 4?