Moto Z2 will be unveiled on June 27, invite reveals

Motorola has already made the Z2 Play official, but the successors for last year's Moto Z and Z Force have not yet received the same treatment. That's finally going to change towards the end of this month.

The Lenovo-owned company has started sending out a "save the date" teaser image for an event on that day, and thankfully this reveals exactly what the June 27 unveiling will introduce: the Moto Z2. 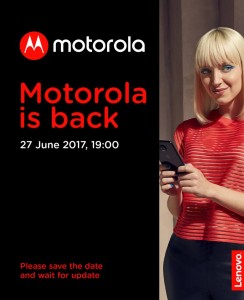 The woman in the picture is holding a Motorola smartphone with the instantly recognizable design of the Z series and a dual rear camera setup. That's long been rumored to debut in the Z2 or Z2 Force, so that's clearly what will be outed on June 27.

Interestingly, Motorola has also scheduled an event on June 21, which may or may not also be about the Z2. We've also heard that the Moto X4 will be announced on June 30, so this is clearly shaping up to be a very busy month for the company - especially if you remember that the Z2 Play, E4, and E4 Plus all got introduced in June as well.

The Moto Z2 should sport Qualcomm's Snapdragon 835 chipset at the helm, along with a 5.5-inch QHD touchscreen, and up to 6GB of RAM.

Looks like this invite was only to re-launch Motorola in Russia. video: https://www.youtube.com/watch?v=7eAPXE4Vw2w photos: https://www.facebook.com/pg/MotoRuOfficial/photos/?tab=album&album_id=802331113259783

na, note 8 will gonna be the best, iphone is for kiddies