Today at IFA Lenovo has finally announced the Moto Z Play, the third member in the Moto Z family - of which the first two have been outed back in June. Unlike the Moto Z and Moto Z Force, the Moto Z Play comes with mid-range specs, but like its high-end siblings it is compatible with MotoMods accessories.

Its design is very similar to that of the Z and Z Force, except for the fact that the Z Play's back isn't made out of metal. Instead, glass is used, so beware of fingerprints. The two glass panels on the front and the back are attached to a metal frame however. And the water-repellent nanocoating is present this time around too. 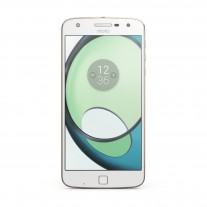 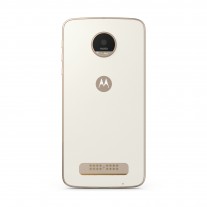 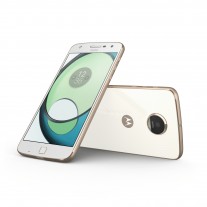 The connectors for the MotoMods are clearly visible on the lower side of the phone's rear, while its camera hump is pretty substantial too - but that's intentional, so that you can easily attach each MotoMod. But perhaps the main hardware feature in this day and age is the 3.5mm headset jack on the bottom - yes, the Z Play has not gone the route of the Z and Z Force in this regard and opted to keep the legacy port around.

The Moto Z Play comes with a 5.5-inch 1080p AMOLED touchscreen, a 16 MP main camera with laser autofocus, and a 5 MP wide-angle selfie shooter with a LED flash of its own. It's powered by the Qualcomm Snapdragon 625 chipset, which has a 2 GHz octa-core Cortex-A53 CPU. The phone boasts 3GB of RAM and 32GB of expandable storage, all the usual connectivity options, and a 3,510 mAh battery that should be enough for "50 hours" of use according to Lenovo. The Z Play runs Android 6.0.1 Marshmallow.

It will be out globally in September priced at €499. As we revealed yesterday, in the US Verizon will sell a Droid-branded version of the Moto Z Play, which will be priced at $408 or 24 monthly payments of $17. This model will be available on September 8.

I just spoke with a service adviser from Verizon and I was told that the price of the Moto Z Force is $720.00. That's the full price due to me not giving up my "unlimited data" I've been grandfathered into. I am not purchasing it from Verizon and wil...

They better price it carefully. With the axon 7 and oneplus3, the z play will fail if priced close to those phones. Obviously people will go for one plus for sd 820 and the ram. Z play has the battery and the moto mods and nothing else. I feel the ma...

It's disappointing that the Z Play comes with a similar design to the other Z phones. The Moto M phone that appeared on TENAA was beautiful. I hope the designs of the Moto Zs and G4s were a one-time thing and that Lenovo makes more phones made o...