Motorola Admiral looks ship shape, headed for Sprint in the US

We caught wind of the Motorola Admiral early last month among a group of handsets all headed for US carrier Sprint. Beyond the name this device was effectively an unknown, with no spy shots or spec leaks that we could readily find available.

The device in question has now made its first notable appearance on the interwebs so let's take a look at what it has to offer. 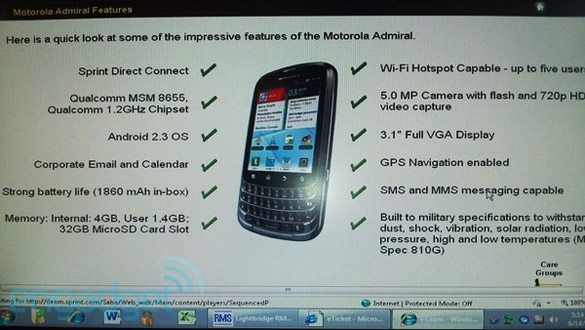 So a the Admiral looks to be a smart, capable, candy bar QWERTY droid, built to withstand the (note: 810G means military spec) bruises and bumps from the environments it may well find itself in as it takes its position in the launch lineup for Sprint's upcoming Direct Connect service alongside the Kyocera DuraMax and DuraCore to name but two other devices.

The Direct Connect service is looking to replace the current push-to-talk service loyal users currently reside on, by offering them up to three times the usable coverage area across the CDMA waves, and Sprint aims to expand their PTT capabilities internationally from early next year.

So does the Admiral rank highly for you, let us know in the comments.

looks great.. still need to know screen resolution & exact measurement. love that powerful battery for just 3.1" screen.. (it is touch screen right? :-) ) i love my bold 9900, but if moto can get the qwerty keypad right, no do...

Hope there will be a GSM version