Motorola has announce two new Android smartphones - the Electrify 2 and the Defy XT - for the U.S. Cellular in the, well, US. 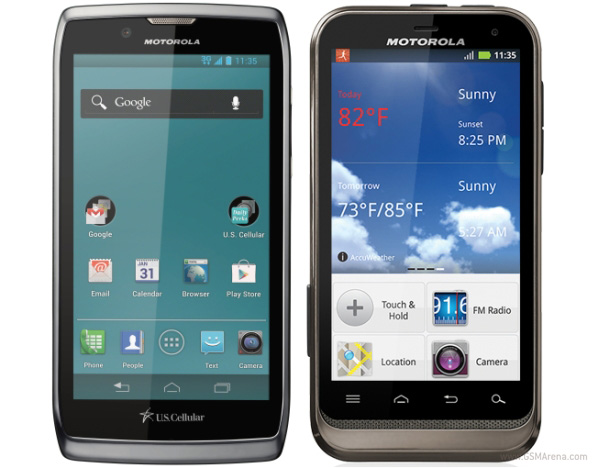 The Electrify is the successor to last year's Electrify, also known as the Photon 4G, but it is closer to the current Atrix HD. The two look a lot similar but the Electrify 2 cuts down on certain things. For example, it has a 4.3-inch qHD display compared to the 4.5-inch HD display on the Atrix HD. It also get a slower 1.2GHz dual-core processor (no specific ship mentioned but it's probably the OMAP 4430 from the RAZR).

The Motorola Electrify 2 is now on sale for $199 with a $100 mail-in rebate. At that price you'd have to wonder why you would buy a phone that has less features than the Atrix HD instead of the Atrix HD itself, which sells for the same price on AT&T.

Moving on to the Defy XT, this one gets a 3.7-inch “high resolution” display, 1GHz processor, 5 megapixel camera, FWVGA (854 x 480) video recording, 512MB RAM, 1GB ROM and the same rugged body that the Defy series is known for. Unfortunately, this phone will be launching with Android 2.3, Gingerbread, which is simply unacceptable today.

The Motorola Defy XT will go on sale tomorrow, although no price information is available at the moment.

Lol bunch of jokers are aligned in motorola to get bashed by consumers with no profit no purchase and no updates.... full jokers are on in motorola .. jus making excuses .... go to hell