Motorola got on the Android train and they never looked back. Today they announced several new droids, three of which are GSM compatible. It's a tray full of Eclairs with QWERTY keyboards on the side plus a pinch of MOTOBLUR.

Meet the Motorola SPICE, FLIPSIDE and BRAVO. The Motorola FLIPSIDE is what Moto does best - a QWERTY droid. Unlike the other "flips" (BACKFLIP and FLIPOUT), the FLIPSIDE has a traditional side-slider form factor like the MILESTONE. 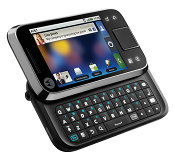 The Motorola FLIPSIDE has a 3.1" HVGA touchscreen and a three row QWERTY. It runs Android 2.1 Eclair with the MOTOBLUR custom interface, which offers great social networking integration. The connectivity is covered by quad-band GSM/EDGE and dual-band 3G with 7.2Mbps HSDPA. A 3MP camera, 2GB microSD card in the box and 256MB RAM round off the interesting specs.

Next up is another QWERTY packing phone - the Motorola SPICE. It's a portrait slider with a 3.0" QVGA screen. The camera is another 3MP snapper and the 3G connectivity has 3.6Mbps HSDPA.

Finally, the Motorola BRAVO slims down by dropping the QWERTY and grows a bigger screen instead. It's a 3.7" FWVGA (480x854 pixels) unit and the bigger battery (1540mAh) will shoulder its load.

The Motorola FLIPSIDE will launch in select regions, the BRAVO will debut in North America, while the regional availability for the SPICE is less clear. The three phones will come out by the end of the year.

Check out our blog for the new CDMA droids from Motorola (including the Droid Pro).

"All you have to say it beautifull look go and love what people doesnot even care about. Beautiful please stop that. Please!" what the hell u talkin about motofanboy? It's great to see that ur very loyal to moto and obviously had a lo...

well i clearly said that phone design is ONE aspect to consider so yeh.. but of course there are many other things, like u said megapixels, processor, os etc etc but point being phone design does have a large impact on a consumers decision in purchas...

So consumers now base their decisions on the phones' design now? I thought we are in the age of "substance over style" ever since we've been comparing processors, megapixels and features?