The Motorola DEXT, which features the new BLUR interface, will be available in the UK exclusively on Orange in a few hours time. This feature-packed Android device is the most exciting device to come out of Motorola and is sure to cause some waves in the Android world.

We've shown you the Motorola DEXT before (it will be known as "CLIQ" in the US) and we've told you almost everything there is to know about the BLUR interface. 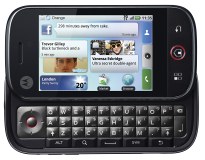 It's not exactly stock Android - Motorola took it to the shop and added some racing stripes. It's not a full UI redesign a la Sense UI, but there are tweaks (like software call keys) and there are plenty of new widgets and apps that aggregate tons of data from various social networking sites into more manageable chunks.

To the UK public at large DEXT will be available tomorrow, October 7th, in Orange UK retail outlets and the following day at Phones 4U stores. If that seems like too long of a wait for you, consider attending the opening of the Orange Multimedia Store in Milton Keynes today at 3pm UK time, where you can snatch one before everyone else.

You can check out this short video, which demonstrates the UI, to get a better feel of it:

Or you can head to the MOTOBLUR mini-site and see it in more details.

I work at Phones 4U, theres no internal news saying that well be getting the DEXT tomorrow, they must know something we don't.....