This is not the first time we're seeing the Motorola DROID 4, which has been a long time coming. First it leaked through some hands-on images and then we saw an official press image leak. Today we have something different; hands-on pictures of a dummy unit of the smartphone. 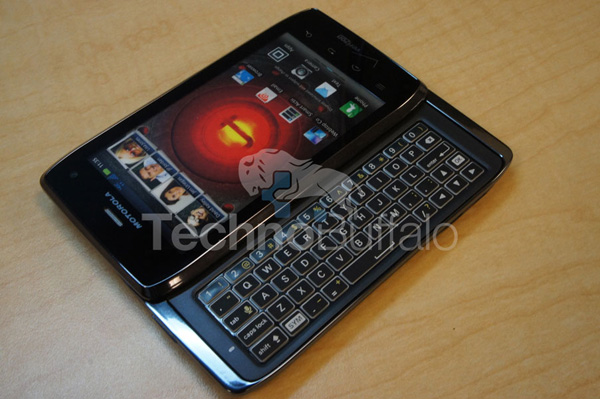 These dummy units are the same ones you find in stores and built to scale and move and behave just like the real thing, except you can't actually use it.

With the dummy unit, TechnoBuffalo noticed that the device has a soft-touch plastic surface. The keyboard on the DROID 4 is larger than the one on its predecessors and was found to be a lot more comfortable. As for the rest of the design, we already knew that the DROID 4 had a slightly thick RAZR look to it.

We still don't know when the actual device is going to ship but hopefully it won't be too long now. For more images, click on the source link below.

The new Droid Razr may not quite be the GS2 or Note, but seems to be a very awesome and have a couple features that they dont have and is extremely slender. Also a nice Super Amoled screen.

Once upon a time I loved Motorola but I'm still using the first Droid waiting for Motorola to match or equal the Note phone by Samsung. Motor stop with the midpriced phones and make your grandioso high priced but earth skaking phone one more time. Y...

hello, moto has a 50 years of experience of telecom ,solid r&d.but bad luck hello moto ,i have given 10 years of mylife to moto, i am proud of u,