We're about twelve hours away from the Motorola event where they will be announcing the new DROID RAZR. Of course, they never mentioned the name of the device but the previous leaks and the teaser video provided enough clues. But if you think they were not enough, here comes the actual image of the phone. 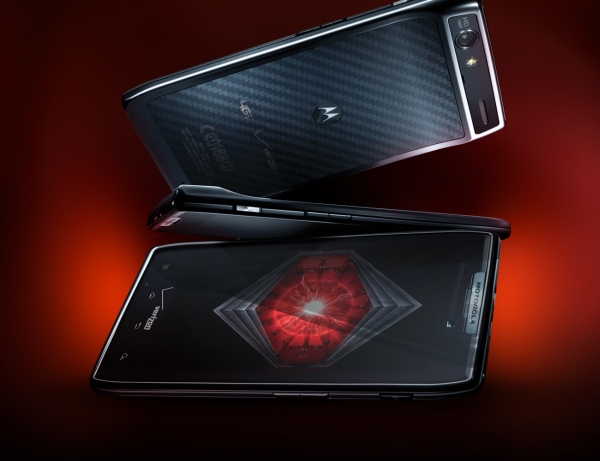 This image was discovered by Droid-Life.com on Motorola's teaser site and gives us a good look at the new DROID RAZR. Well that's one name full of history. It must be said that it is indeed an attractive looking design, particularly the back with that sweet looking Carbon fiber adorning it.

You can also see the 4G LTE logo on the back, along with certain other details such as the FCC ID, which suggests that the battery is sealed. The back swiftly rises to a bulge near the top, where you can find the camera lens that claims to do 1080p video along with an LED flash and a loudspeaker.

On the side we can see the volume control keys and the power/lock key. The top has the headphone jack, USB port and what could be a microHDMI port.

The front also looks quite attractive, with a flush (Gorilla?) glass. We can see the front facing camera above the display and the four control keys and the microphone below. The display doesn't seem particularly big or maybe the phone is just too wide.

As for the rest of the details, we'll find those out soon enough.

motorola have to learn from other brands like se to make smooth ui. See se exists strong in market because of looks alone. The ui smoothnes is very important 4 an ordinary person to like a phone. Well done moto with the design. Moto havnt improved ev...