The scene above the display is quite busy. The nicely looking grill houses the earpiece and the sole loudspeaker of the device. Additionally, you will find the 2MP front-facing camera, the ambient light and the proximity sensor, and one of the infrared sensors.

Below the screen is where the three capacitive keys for navigating around Android reside - it's been a while since we've seen the setup. The second infrared sensor is in the area too, as is a pinhole for the mouthpiece.

There is nothing on the left side of the phone. The right side is home to the power/lock key and the volume rocker.

The sides of the smartphone

The nano-SIM tray is ingeniously tucked under a removable volume rocker. The solution is rather original and makes the smartphone's design look cleaner.

The 3.5mm audio jack is located on top of the device. The microUSB port sits on the bottom.

The top and bottom of the Motorola Droid Turbo

The back of the Motorola Droid Turbo is where the 21MP camera and its dual-LED flash can be seen. The signature textured Motorola logo sits there too. A Verizon and Droid branding complete the picture.

The back of the Droid Turbo

Three tiny pinholes for the built-in microphones can be seen on the back, too. They are visible only upon close inspection.

Motorola Droid Turbo features a whopping 3,900mAh battery. The smartphone is quoted at offering up to 48 hours of usage time and 675 hours of standby time.

We put the Motorola Droid Turbo through our battery test and it posted an endurance rating of 90. This means that the smartphone will easily make it past three full days of usage should you go for an hour each of telephony, web browsing, and video playback daily. 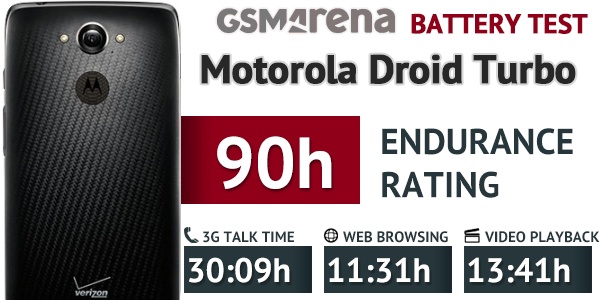 The device doesn't offer a user-replaceable battery, but it partially makes up for it thanks to the bundled Motorola Turbo Charger. The latter provides up to 8 hours of mixed use for only 15 minutes worth of charging.

On the local connectivity front, the device offers Bluetooth 4.0 alongside Wi-Fi with a/b/g/n/ac standard compatibility. MicroUSB 2.0 port with USB host is also at hand. Positioning is covered by A-GPS and GLONASS support.

The device allows you to share all sorts of media via NFC by simply touching the device and other NFC-capable devices back-to-back.