Motorola is on track to unveil a new smartphone dubbed Motorola Edge+ soon. There's no word from the company yet about this smartphone, but we know an official announcement is imminent since the smartphone has passed through Geekbench, revealing key specs in the process.

According to Geekbench, the Motorola Edge+ will run Android 10 and have 12GB RAM onboard. The motherboard is listed as "burton" and the processor underneath has eight cores with a base frequency of 1.80 GHz. 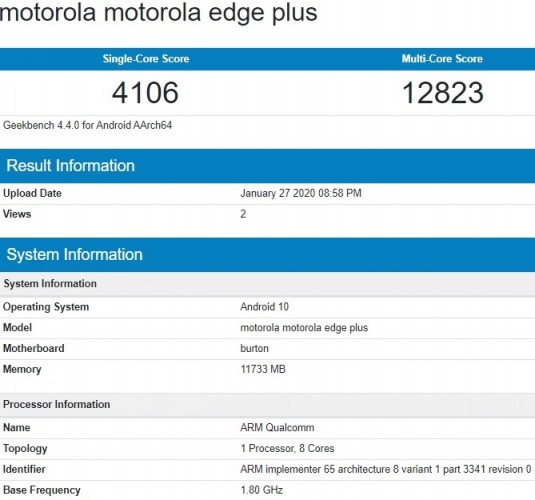 The Motorola Edge+ will sport a punch hole display and will be sold through Verizon. Other details about the Edge+ are still a mystery, but we should hear more about it in the coming weeks.

Besides the Edge+, Motorola is also expected to launch a smartphone with a stylus, but we don't know much about it.

Well the design is jjjust paper work and computer work. Real working device comes from Foxconn and when the china closes its gates for apple the will move to Indoa or Vietnam or maybe Kambodzia etc. Countries where they can tear the people worse t...

If Apple decides to move production to another country, does it make the iPhone any less American? Think about it, I mean really think about it. There's a reason why it says "Designed by Apple in California, Assembled in China" on the back of their d...

Very funny but no. I have my own tastes for cell phones. Unlike you i dont support greedy manufacturers who make for 200 and sells for 1500. And your desired apple. Litterary whole phone is bought from foxconn from china. The only america...