After announcing that it will build it in the United States, Motorola continued the patriotic theme in promoting the upcoming Moto X smartphone. The Google-owned company chose to release its first ad for the upcoming device right before the 4th of July. 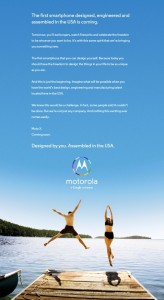 The full-page print ad you see above, is set to be released in the July 3 editions of the New York Times, The Washington Post, USA Today, and The Wall Street Journal. Headed by the company's brand new logo, the Moto X ad is centered around the handset's assembly in the United States.

Another juicy bit from the ad is the statement that the Moto X is "the first smartphone you can design yourself." We are yet to find out what exactly this line means.

Considering the massive marketing push under way, we reckon that it won't be a long wait before the Moto X goes official. As always, we'll keep you posted on any further developments on the subject.

i like motorola, but motorola mobiles are not available in INDIA, BANGALORE SO KINDLY RELEASE HERE......