Motorola has just unveiled a new addition to its mobile phone portfolio and it's a pretty strange device. The new handset is a featurephone called Motorola MOTOKEY 3-CHIP and has 3 SIM card slots as its key selling point.

The other highlights of the MOTOKEY 3-CHIP are a full physical QWERTY keyboard a 2 MP camera, an FM radio receiver and a microSD card slot. The handset will have a 2GB microSD card included in its retail package. 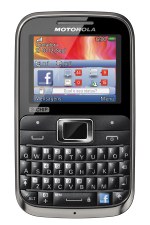 Being a simple featurephone, the Motorola MOTOKEY 3-CHIP doesn't even offer a touch-enabled display. Also just one of its SIMs may be used for transferring data at a time, with the other two available only for telephony and messaging.

The MOTOKEY 3-CHIP will only be available on the Brazilian market from the first week of June. The suggested retail price of the handset is 349 BRL (around $171).

There are good tecno phones which gsm arena is ignoring.

This phone can slot 3-SIM cards, good for 2 mistresses... One for wife, one for mistress and one for gf. Cool.