There’s more to be demanded from the gallery

The Android 2.0 of the Motorola MILESTONE brings in a new view mode, which we find rather attractive.

The MILESTONE image gallery has a new view mode

Of course the gallery supports gesture controls like changing images or panning with finger swipes so you can altenate images without having to return to the default view. Just swipe to the left ot to the right when looking at a photo in fullscreen mode and the previous/next image will appear.

The pinch-zooming is also available here thanks to the MILESTONE multi-touch support. There is no double tap zooming however.

A strange bug of the gallery we noticed is its inability to zoom to 100% for some unknown reason. That can make you think that you photos lack detail when you look at them on the handset but transfering them to a computer reveals the truth. You don't see the real image in the gallery but a downsized version instead.

There isn't much more detail to be seen when zooming in

On the positive side there are two important upgrades brought by the new OS version. You have the multiple marking that allows mass cut/copy/delete and Bluetooth file transfers from the gallery. None of those is groundbreaking to the mobile phones world in general but they are both huge improvements for Android.

Video player is nothing to write home about

Getting videos to play on Android turned out to be a pretty hard task. In the beginning there was no video player at all and you had to rely on silly hacks to view 3gp files via email. Then came the HTC Magic which could play videos from the gallery but had no dedicated application.

We guess now that since we finally have a real video player, it’s time to start wondering when they will actually turn it into something worth using. The video player itself is as simple and limited as it could possibly be.

You just hit the video player icon you get a list of all videos available on the phone. And the controls while playing a video boil down to play/pause, next and previous buttons, as well as a draggable progress bar.

The codecs support is also pretty limited with DivX and XviD nowhere to be seen. H.264 is as good as you are gonna get, but at least those ran okay with no hiccups. Still, if you are willing to spend some time converting your videos you might actually find the Milestone’s giant display pretty great for watching videos. Nevertheless, it is disappointing that such a powerful device can’t run unconverted video and has such a limited codec playback.

Music player needs an update too

Sadly, the music player saw no updates in Android 2.0. Don’t get us wrong, the Motorola MILESTONE is not too bad at managing your audio files but there’s definitely room for improvement.

The first screen of the music player has four large buttons, which offer the four main ways to search in your music collection - by artist, album, song or choose one of the playlists you've created.

The functionality of the music player hasn't changed much. It has that great feature that allows you to quickly look up a song in YouTube or through Google search by holding down a finger on a song. What's even better, the YouTube search results are loaded Straight into the YouTube client.

Besides gradual typing for searching a specific song, there is an alphabetical slider, which appears on the right side of the track list.

The audio quality of the Motorola MILESTONE is somewhat of a letdown, considering the price tag. It’s not that it has any great flaws but it achieved average or even slightly worse than average on most readings.

The excellent frequency response is probably the best thing about the MILESTONE output. Almost perfect throughout the range it is one of the best we have ever seen.

Unfortunately the dynamic range and stereo crosstalk readings are seriously short of impressive and so the noise level mark. Distortion levels are good and certainly nothing to worry about but we have seen some do even better. All that said, the MILESTONE audio output isn't bad in general, it just isn't as good as most other aspects of the device's performance.

And here go the results so you can see what the MILESTONE is up to for yourselves: 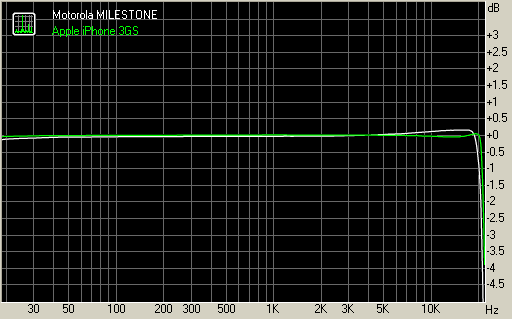