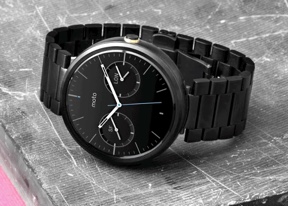 The retail box of the Moto 360 is round like the smartwatch inside it. In addition to the device, the package contains a Qi wireless charging cradle, a wall charger, and a USB cable.

The retail package of Moto 360

The charging dock of the smartwatch is probably the coolest solution of its kind we've seen to date. When placed into it, the Moto 360 offers a dedicated ambient clock mode, which looks great on a desk or a nightstand.

A look at the charging dock

Available accessories for the Moto 360 include genuine Horween leather straps in three different colors (black, brown, and stone) and metal bands with black or genuine metal finish. They are priced at $29.99 and $79.99 respectively.

A look at some of the available watchbands

Motorola Moto 360 is arguably the best looking smartwatch available at the moment. With round body and a display with no bezels, the device looks more elegant and desirable than any of its competitors. 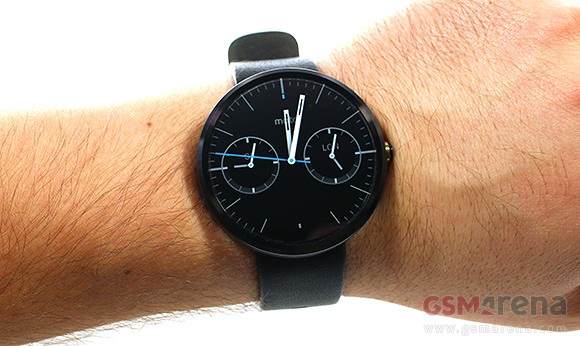 A variety of available metal case finishes assures that the looks of the Moto 360 will fit just about every taste. The smartwatch is available in natural stainless steel finish, black, and champagne gold.

The champagne gold and the stainless steel version of the Moto 360 can be ordered with a slim 18mm metal band, which will appeal to female tech lovers. Motorola deserves a hat tip for offering such color combination - it is the only manufacturer to do so for the time being.

Build quality of the smartwatch is solid. Its stainless steel case handles daily wear without breaking a sweat as does the single button on its right side.

Gorilla Glass 3 covers the display of the Moto 360, so it is not likely to scratch easily from regular use. You can always opt for a screen protector if you want to take an extra step to prevent accidents.

Moto 360 is incredibly light despite its metal construction. At 49 grams with the genuine leather band, the device makes for a good daily companion - you will barely feel that you are wearing it.

The hardware layout of Moto 360 is simple. The touchscreen and the button on the left side of the smartwatch are in charge of controlling it.

Underneath the device is where the heart rate sensor can be found. The lugs for the watchband are there as well.

A look at the hardware of the Moto 360

As you probably know by now, the display of Moto 360 is not completely circular - the ambient light sensor of the device, as well as the LCD driver, take up a small part of its bottom. The sensor is particularly visible if you use a light colored watch face, though it doesn't have any effect on the device's functionality.

The screen offers stellar, though far from perfect contrast. Colors are good and so are the viewing angles. Sunlight legibility could have been better, but we didn't find it to be a deal breaker.

Moto 360 is powered by a 320mAh battery, which is quoted at offering all day of mixed use. The Qi wireless cradle tops the battery up in about an hour.

Our experience with the device's battery fell mostly in line with Motorola's original claims. When using the smartwatch between 8am and midnight without the always-on ambient display, it burned through roughly half of its battery capacity.

Naturally, if you opt for turning ambient display on, you can expect a dip in the battery life of the device. We reckon however, that it will still make it easily through 12-14 hours of use - enough to get you through most of the day.