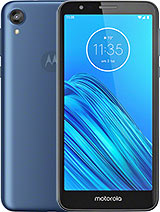 Anonymous, 13 Feb 2021Not a bad cheap phone. Works much better than I expected. Camera takes decent pics and video... moreYou are correct in how you did what you did.

However, SD card lifespan is measured in read/write cycles.
By making the card part of the internal memory, you are drastically shortening its lifespan.

Also, the card is now mated to that device, and will not work in any other.

This is why it is not advisable to se a SD card as internal memory.

Anonymous, 18 Feb 2021Thanks for the suggestion and directions for increasing storage. Yw. Also, this phone works great on T-Mobile in the USA because VoLTE and Wifi calling works on T-Mobile. AND this phone has all of T-Mobile's LTE bands (2, 4, 5, 12, 66, 71) plus the LTE bands they aquired from Sprint (25, 26, 41). I have the unlocked version of this phone on T-Mobile and my phone connects to former Sprint LTE band 41 a lot, phone works great on this LTE band especially in areas where it is congested on other bands.

Correcting my previous post (no Edit available):
Page Plus Cellular resells access to the Verizon CDMA network. But a Page Plus support person validated IMEI numbers for three Straight Talk no-contract phones, which use the T-Mobile/Sprint CDMA network.

Walmart also has Moto e6 for $39.95
under T-Mobile CDMA by Straight Talk,
with no contract and no commitment.

Page Plus verified three IMEI numbers
as being compatible with their 3rd party
T-Mobile/Sprint network, as Straight
Talk phones are supposed to be.

Anonymous, 13 Feb 2021Not a bad cheap phone. Works much better than I expected. Camera takes decent pics and video... moreThanks for the suggestion and directions for increasing storage.

Not a bad cheap phone. Works much better than I expected. Camera takes decent pics and video, not as good as high end but not bad. I knew when buying this that the 16gb internal storage is nothing, so here is what I did to make this phone work for me with enough storage and without lagging:

Only the default apps that came with the phone are installed on my phone's internal storage, everything else is on the micro sd card. Almost half of the 16gb is used by operating system and default apps. Phone runs great like this. Just make sure you pick a high speed and reliable micro SD card like the Samsung one I got.

KingOfKhaos, 22 Sep 2020This phone does NOT have a fingerprint sensor. Look under the rear camera where the Motorola logo is. Thats where the fingerprint scanner is on the E5

Worst POS chunk of technology I've ever bought. Completely user-unfriendly, and it came without a user manual. I hate this phone so much, I went out and bought a burner, which I'm going to use for actual phone calls / texting. Motorola can go get effed - I will never buy another thing from them after this.

I will say it's pretty well fabricated, as I've thrown it into block walls out of frustration multiple times and it still "works".

As well as it ever did. Go to hell, Motorola.

1/21/2021
So, I've had this phone a little over a year now. The phone is very decent, not super slow but not the best. It does not have a fingerprint reader.
Pros: lightweight, durable screen, removable battery
It's good if you're someone who isn't gaming or browsing constantly.
Cons: after a full year there are obviously some cons to it, the battery has now gotten to the point where sometimes it'll charge, other times it won't, the charger port gets loose after a while
Camera quality is mediocre at best

The screen on this phone is fairly decent, displays color well, in the year I've had it I've dropped it a couple times and has a crack along the bottom of the screen that isn't super noticeable

The speaker isn't a loud one, but it isn't super horrible either.
Phone works well on TMobile network.

In less than a month I'll have had my e6 for a year. I have to credit Motorola for a high survivability screen. I've dropped this thing countless times even in high screen hazard areas. No damage yet. As far as an Android platform I haven't ran into any significant issues that I recall, but I'm not an app development guy or anything. The Internal speaker could be louder but it's audible. There is one aspect of this thing's personality that is sometimes challenging. It's only if you touch it. If you pick it up, if it's in your pocket, if your grip becomes somewhat precarious, this thing will start apps, turn on the flashlight and do not disturb or airplane mode (bad). It'll make phone calls. It will make system changes. If it's doing something that's to any degree imperative I have to approach it as if it were a loaded mouse trap. And the battery system seems to be as good as anybody else's. After nearly a year it still tests in good condition. I can't really evaluate the lasting time, I use it too heavily in it's andoid world.

chimerablack, 19 Dec 2020Why give mAh without the discharge rate? Completely useless...The discharge rate depends on usage. It's very different when on idle vs playing heavy games, for example.

Can not send MMS from this phone. Probably is not capable of doing so.
Meaning I can not sent message with attachment nor receive such. Not sure though as I am still in the process confirming if Android moto E6 is capable of MMS

I picked up one at Walmart last Aug out the door $60 hated so much a week later I picked up one more. I got one for my granddaughter she dropped her $800 Samsung and cracked her screen they want $250 to fixit. That's 5 e6. I play games, Ebay, and email on my Dell so this e6 is perfect . although its getting dirty maybe I'll drop it off the roof and go back to walmart and get a clean one.

Why give mAh without the discharge rate? Completely useless...

Anonymous, 15 Nov 2020Where is finger print set upThere is no fingerprint scanner on this phone, not sure why its listed as having one

MotoZguy, 13 Jun 2020I have 7 phones , I'm a tech guy and love collecting smartphones that I use for tethering when... moreMOTOZGUY, I just bought a Total Wireless Moto E6 at Target for $19. They price matched Amazon's $19.99 price, plus I received 5% off using my Target Redcard. This is my first smartphone, coming from a 3G Verizon Samsung Gusto 3, because of 3G going away in 2021.I have not activated it or ported my number over, as I want to get more familiar with it and move my contacts over(manually) before doing so. My question is where do I enter the #*#*4636*#*# you mention to lock in LTE? Do I have to be online, or can I do it in it's present state? The only thing I see now is the signal strength icon, but no LTE. If I look at SIM status, the mobile voice network type is CDMA-1xRTT. The same for mobile data network type. If in LTE, will the LTE icon appear next to the signal strength icon? Shouldn't always go to LTE if the signal is strong enough, or is it because I have not activated the phone and ported my number over?
Any help you can give to a newbie smart phone user would be appreciated. I live out in the country and only get 2 bars 3G on my flip phone, so want to make sure 4G LTE will work in my area.

This phone does everything well I need it to:

All while fitting completely in blue jeans back pocket AND with a removable battery. Aces up at my poker table.