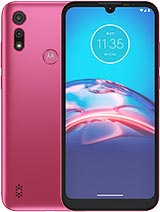 Dada, 13 Jun 2021If you have 100 USD extra you better donate it than by thi phone. One of my first phones was a... moreThat decides it. I'll buy it BECAUSE IT HAS A REMOVABLE BATTERY. As all phones should have. And Motorola is one of the finest brands. I still have my G4 play working fine. I just need an update.

If you have 100 USD extra you better donate it than by thi phone. One of my first phones was a Motorola Reiser and I haven't use Motorola phones since then. I can say that I regret the moment I bought this one a few days ago. It is the worst phone I ever had. I had to return it after two days of using it because it constantly turns off. I couldn't even connect it with my smartwatch, and I had that option with my old Honor 7c. Now I'm waiting for the new one, but I think that the model is a problem.

Andy, 13 May 2021Has a smartphone "Motorola E6i, 32GB, Dual SIM, Meteor Grey" removable battery or not? No,the battery is not removable.

well today I buy this phone to 130$, I need a phone just to read emails and listen to music.
As I have previously had the one fusion(I wet it with water, yes I'm an idiot.), I bought practically blind because of the rush and because my phones have always been motorcycle.

The lag is quite noticeable, especially in the camera, I regret the truth a bit, I would have bought the 2019 model with SD 435

Motorora what the hell dude? I know it's a low-end but literally my old G5 plus works a lot better.

u can get G8 plus in this price range and it is much better, same for G8 power which u can buy for less than this

This is for theBrazilian market where despite the monthly wage being 205 U$ dollars, all phones are priced double their US/China prices.

I'd rather keep my Galaxy S5 instead

Dear Motorola! People today are technically educated enough and they are quite well versed with smartphones and their characteristics.

Even the elderly will ask their children and grandchildren for advice before buying a smartphone. And they certainly wouldn't advise buying such a smartphone for such a high price.

What are you hoping for Motorola? what kind of person do your marketers consider a customer of your company? A very very stupid person whom you can deceive as the traders on the street market do?

it's sad that you think of your clients like that!

my first two phones were Motorola. Then you made good phones and sold them at a reasonable price. But now you are losing your good name.

What is the heck is wrong with Motorola? Nobody would ever buy this crap. Damn, this phone would be slower than a snail

Wow, this may be the worst product I've seen in the last 5 years. Even for the 2015 standards, this is super expensive for what it offers. A $30 is enough for this kind of crap. #BoycottMotorola