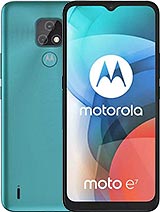 The moto e7 is the worst Motorola phone I've owned. After several moto g phones (most recently G8plus) the e7 is terrible.
Why? Touching the screen when web browsing is a lottery. I keep reading the article above and below because it's so inaccurate about where you touch the screen. And it's soooo slooow. It takes forever to navigate. And frequently it freezes when receiving calls, so I can't answer, because none of the buttons work, and the screen is black. And same thing hanging up at the end of a call. Sometimes it takes more than a minute for the phone to respond to anything at the end of a call.
I thought the G8plus was a fantastic phone, which I would have bought again if still available (and scored 9/10 or higher), but the moto e7......scores 3/10.
I'll still buy moto in the future, but I'll be a lot more sceptical.

George, 17 Jan 2021A very disappointing product. I was delighted with my old Moto G7 Play - but it's inheren... moreYou should have chosen the G9 play. Miles better than this one and yes, the true successor of your G7 Play as the name suggests!

This phone is lower end range so it´s best avoided only for calls and few chats on whatsapp. That salesman simply coned you.

I always say to people, sometimes it´s better to spend extra cash and buy something more suitable even if you don´t need rather than a just ok product.

George, 17 Jan 2021A very disappointing product. I was delighted with my old Moto G7 Play - but it's inheren... moreWhat do u except for the price? I had a Nexus 5 I paid 30k for it 6 years ago with a 445 ppi.
Moto E7 Power I paid 8k in 2021 with a 270 ppi.
I have lots of reasons to complain if I compare the phones and ignore the price too.
It's like buying a Tata Safari and comparing it with a Ashton Martin.

Instructions for use should help to find out how this phone works.
How can I get this?

I only need a phone to receive calls and read my emails, it does the job perfectly for me

A very disappointing product. I was delighted with my old Moto G7 Play - but it's inherent design fault was the very fragile and tiny power button which eventually broke. I was promised by the salesperson at a well known UK Supermarket phone retailer that the Moto E7 was an all-round better phone than the old G7 Play. It turns out this simply is not true. The E7 lacks high-speed charging. It takes ages to charge and the battery drains rapidly. The screen is dull even at the brightest setting. Whites appear cream in colour. The display is pixelated due to lower resolution than the G7 Play. It cannot cope with more than one app running without pausing. And most annoying of all, despite the big claims about its supposedly wonderful camera system, the video recorder does not have image stabilization! I cannot believe Motorola have gone so far backwards with their technology. The E6 Play and G8 Power Lite in the supermarket range have reverted back to the fiddly old style Micro-USB ports. The E7 is their only Motorola product with the modern standard - USB-C. That was the main reason I chose this model, to avoid having to change charging cables. The other snag with the E7 is the poor sound output. It is in mono rather than stereo as well. So disappointing. Unfortunately when I did further research there was nothing on the market that was comparable to my G7 Play in terms of specifications and price. Motorola have really made a retrograde step ditching an excellent phone in favour of the E7.

Anonymous, 15 Dec 2020i dont like the fact that most moto e phones have a weak chipset They're the cheapest in the lineup what do you expect

Adul Al Salami Kebab, 05 Jan 2021Hmm its perfectly fine as budget phone, they should make a pro with more RAM and storage maybe... moreNot just a budget. This phone blows 1000 phones out of the water.

Hmm its perfectly fine as budget phone, they should make a pro with more RAM and storage maybe other than that why not bigger battery if that is possible? :D

Well it depends on how much you pay for it. For example, Moto E6 is going for $30 right now, Simple Mobile version in the US (2/16GB). It's a carrier locked phone, but what do you expect for $30?

Yeah, bigger and with less RAM is the way to go. I think 8" with 512MB RAM would be the best

Compared to the Moto E6, this is a big step up in terms of screen size, overall size & weight, battery capacity and camera hardware. And they finally added Type-C!

sozhiit, 24 Nov 2020Life lesson: Don't buy phones with Cortex A53 inside. Worst for gaming and poor overall p... moreMy phone has cortex A53 and I had no problems gaming or whatsoever

sozhiit, 24 Nov 2020Life lesson: Don't buy phones with Cortex A53 inside. Worst for gaming and poor overall p... moreA53/A55 is best best at battery efficiency and that is their purpose, most games run fine on these the issue is more likely the dual-core graphics chip which is best for simple 3D games and 2D games only! Anything above PUBG mobile is insanity to even try to run on this... UwU

When will they actually start using 4GB RAM on the non-Plus E models and stop killing unique sale points they introduce in previous generations?
They had a REMOVABLE BATTERY on the E6 Plus. Why would they omit that on the newer E phones???
I often fail to find logic in between generations of new Lenovo/Motorola devices.
I think only the Moto Z series were consistent for 3 generations, just like Moto had promised and even if Z4 wasn't perfectly holding the Moto Mods, we got a 4th year of using the same additions and cases which only the older iPhones could offer us.
I think the rest is a story of a company that still can't find its identity in the smartphone world while ticking many of the things that the consumer needs in their products.