The Moto E (2nd Gen) comes with a modest 5MP camera, this time around with auto-focus. It takes images in a maximum resolution of 2560x1920 pixels. It has a built-in HDR mode, which can also be set to activate automatically in certain shooting conditions. 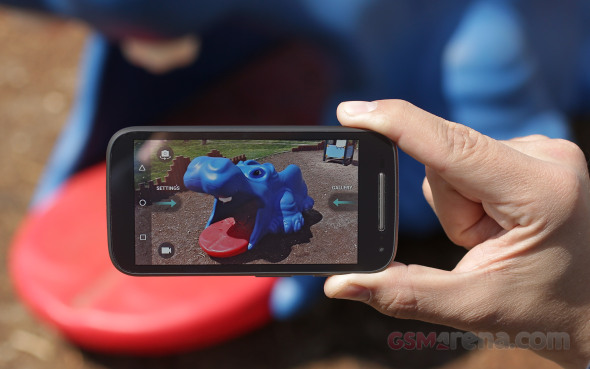 The camera does have the same minimalist interface as on the Moto X and E, which includes just two on-screen buttons on the right-hand side for video recording and front-facing camera. Taking an image is done simply by tapping the screen.

The 5MP camera samples came up with great amount of detail, little noise, lively colors and average dynamic range. The white balance is often off though and you can spot the pin/orange tints around the sunny photos. This could be easily fixed with any auto-enhance feature, but still.

Turning on HDR does a good job of extending the dynamic range, and it also fixes the white balance issues. However colors tend to get a bit overblown in this mode, which takes away some of the realistic look of the images. It's ultimately a matter of personal preference as to which type of image you prefer, but keep in mind that both modes have their drawbacks.

Moto E (2nd Gen) supports shooting 180-degree panoramic pictures. The resolution is quite low though - 2000x500px. The resolved detail and contrast in those pano images is quite poor though.

The Moto E (2nd Gen) enters our Photo quality comparison tool to face off against other 5MP shooters. You can also pit it against other cameras from within the tools' page.

The camcorder UI shares the same viewfinder with the still camera, with the top right button being used to start the video recording. The Moto E (2nd Gen) records 720p videos at 30fps. The bitrate averages about 10Mbps, which can explain the modest resolved detail. Audio is recorded at 128 Kbps in stereo mode with a sampling rate of 48 kHz. 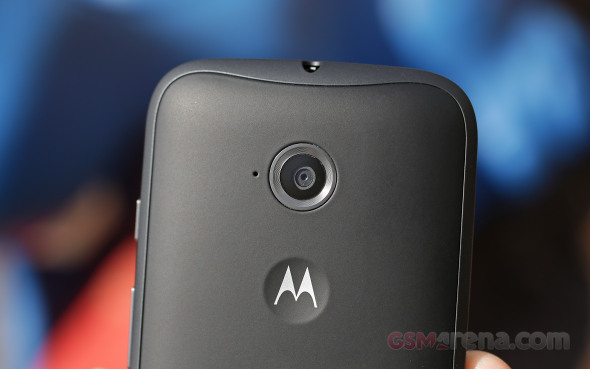 Videos by the Moto E (2nd Gen) are far from stellar, with the modest level of detail being the most noticeable issue. There are similar problems with average dynamic range and wrong white balance like on the still camera.

And this is an untouched 720p video sample taken straight from the Motorola Moto E (2nd Gen).

The Motorola Moto E (2nd Gen) enters our video quality comparison tool to be pitted against other 720p camcorders. You can choose which devices to compare against from within the tools' page.