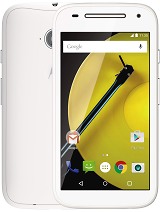 Are both SIM slots 4G in the Dual Sim model or one 4G and the other 2G?

How to set 4g internet connection? I have only 3G and 2G options in settings.

please, 12 Jun 2015I have been using moto e2 for a month and is quite pleased with its working it is a good cheap... moreIt has OTG Support.
YES. *Occasionally* it gets HOT.

MotoE 2nd Gen - 4G phone, was gifted to me on July 2015, seriously am not very happy to have this phone. The earlier version of Moto E is far better in terms of look, performance, speed and camera (it had many fans a long list including me), but the upgraded version has a pathetic camera i will say. Pixels are all disturbed and the speed is not that great. the touch of the screen is not that smooth. In total i dislike this and feel the need to share this feedback before people put their money on this.

Dev, 01 Jul 2015Such a piece of diamond..!! Yes it is as solid as diamond and power packed with smart phone es... moreYou are right brother. I have also moto e 2nd gen 4g dual sim that's good mobile phone

3 days used ,honeslty guys phone is good ,performance is very good,,camera is okay on lights ,,body is very good using good material as compared to other company handsets.very good speed ,,battery back up is impressive very cool mobile no heating problm so go for it without hestgation

I am using moto e 4g last 2 month. I have not any problem using this phone. I also use external key board and pen drive.

Such a piece of diamond..!! Yes it is as solid as diamond and power packed with smart phone essentials. Guys if you are looking for a budget smart phone then look no further go for Moto E 2nd Gen 4G. I have purchased this beast after 2 months of search. I was a spectator of reviews for 2 months in each and every website about this product. Finally I bought it. I was a user of Samsung note 2; IPhone 5C: Redmi 2. Redmi was a horrible handset I have ever seen. So as other crap brands like lenovo, micromax, xiaomi etc. I have a lenovo Tab also which is also a crap. Trust me guys these heavy spec cheap phones only good on paper but when you start using it you will realise its crap performance. The new moto e 2nd gen 4G has got all the features which a smart phone must have. Everything is so good in it and under 7K I bet no other brand will provide such sturdy technology which Motorola has given. As many reviews stating that it has mic issue or heating problem, all those reviews are fake. Do not count such reviews if you are a true gadget freak like me. Just go for it and I bet you won't regret for your decision of buying this beast. Thank you so much Motorola for providing such a wonderful handset model.

Moto e(2nd) generation 4g is not a good phone.
Today i purchased it from flipkart and when i switch it on and check after 2 minute i was shocked its too hot.
In this phone i am facing heating issue.

There are some problems in MOTO E 2 GEN. 1. Camera clearly is not so good. If u see Nokia 5 MP is more clearly than MOTO E. 2. MOTO E provided VGA front facing camera. It could be 2 MP. 3. If you provided camera facility, flash also provided. 4. Hearing problem. 5. Provided 2390 man battery, but reality it discharge quickly. Motorola should update these feature for making good market in India.

New release Yureka ,Yuphoria and Lenovo's latest A6000,6000plus,A7000 is Not a good mobile.Very cheap materials were used.Speaker very weak,Camera poor.Better to go for Moto E 2nd gen 4g is power house in front of Yureka,Yuphoria,Lenovo A6000,A6000 plus and A7000.Moto E 2nd gen 4G is superior in all aspect especially in Performance and Build Quality just a premium product having only 1gb of ram but and perform better than the 2 Gb ram Yureka ,Yuphoria and Lenovo series phone.Moto E 2nd gen only lack flash but gives a good picks in day light.You have to compromise only with flash except flash everything is perfect in Moto E 2nd gen 4 g.

Thanks for giving best phones in lowest price... poor people also can buy this best phones...