At its dedicated press events in London and Delhi today, Motorola’s latest budget phone the Moto E went official. The Moto E leaked in full a few days ago and there aren’t that many surprises.

The phone is built around a 4.3” scratch resistant display with Gorilla Glass 3 layer on top. It is of qHD resolution, resulting in a pixel density of 256 ppi. Motorola says it has built the phone to last and as a result it is resistant to water splashes. 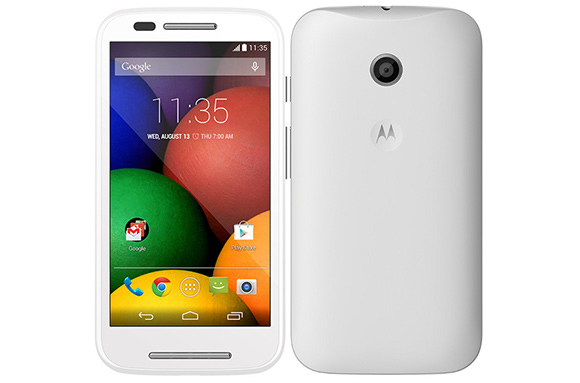 Under the hood of the Moto E operates a 1.2GHz dual-core Cortex A7 processor that runs Android 4.4.2 KitKat. The company promises timely updates to future versions of Android, which is nice to hear for a phone of this budget nature. There’s 1GB of RAM and 4GB of internal memory, of which just 2.21GB is available. Thankfully, it is expandable with up to 32GB microSD card.

Motorola Moto E in the flesh

In India the company has partnered with online store Flipkart, where the phone is now selling for $117 (INR 6999).

Today only, the retailer is also offering Moto E covers with 50% off and free eBooks to go with the phone. Motorola Moto E is available in Black, Turquoise and Lemon color options. Motorola is also including 3 color covers to let you personalize your phone.

finally i got it !