Above the Motorola Moto G display you get an earpiece, the front-facing camera, as well as the ambient light and proximity sensors.

Some sensors join the earpiece and the front-facing camera

With the main controls on the actual screen, the space below the display is completely bare. The same goes for the left side of the Moto G.

The mouthpiece has been moved to the bottom, next to the microUSB port. The port has support for USB host, so if you get yourself an extra adapter needed, you can attach various peripherals like keyboards and mice as well as USB memory sticks. However it has no support for MHL or Slimport, meaning pairing with an HDTV isn't an option (unless the HDTV supports wireless streaming of content).

On the right we see the only two hardware controls on the Motorola Moto G. The power key sits slightly above the volume rocker and while both keys are a bit too thin for our liking, they make up for it with nicely solid press.

The 3.5mm audio jack is located in the middle of the Moto G's top, where it's joined by the secondary noise-cancelling microphone.

The secondary microphone and the 3.5mm audio jack

The 5MP camera lens has the loudspeaker on its side at the back of the smartphone, while the LED flash sits underneath it. A Motorola logo completes the picture here.

A view of the back panel

Opening the back panel is a bit of a hassle, involving pushing you fingernail in the microUSB slot and pulling with a reasonable amount of force until you undo the stubs one by one. It does feel like the cover is about to break at times, but after several changes it's still in one piece, so the problem was perhaps mostly in our heads.

Underneath the cover you only get the microSIM slot. Disappointingly enough, the battery isn't user replaceable and there's no microSD card slot. We could live with the first of those shortcomings but the lack of expandable storage on a device where 16GB is the most you can get out of box can be quite the deal breaker for many.

The Motorola Moto G 4.5" 720p display is one of its most potent weapons in the fight for survival in the overcrowded mid-range. Having a pixel density og 326ppi, the IPS LCD matches the Apple Retina screens and is by far the sharpest display in the price range.

It's not just the pixel count either - the Moto G screen also impresses with very good contrast and nice color rendering. Viewing angles are also very wide with everything remaining perfectly legible even when you go to extremes. There is some color shift, but even so the display is way better than we've come to expect in this price range.

Our only gripe is the white balance, which is a bit on the cold side, but that's nitpicking really.

The Moto G features a 2,070 mAh battery, but Motorola didn't specify how long it is expected to last. The capacity isn't too big, but given the efficient chipset and relatively small screen we were quite optimistic about its prospects.

The Moto G duly delivered and posted an endurance score of 54, meaning it will last for more than two full days if you do an hour of calls, an hour of video watching and an hour of web browsing each day. The achievement is also much better than what the Moto X managed, but that one had the always on voice commands eating into its endurance. 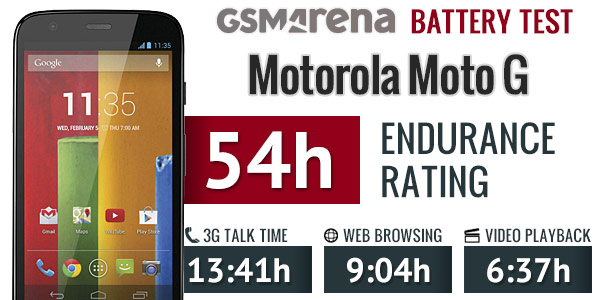 We should even give the Motorola Moto G a few extra points here as it's notably brighter than most of its competitors at their respective 50% settings. You can learn more about our testing procedures here.