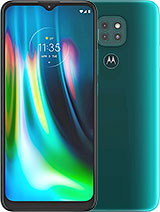 Justice808, 24 Aug 2020I'm guessing this won't get updated to Android 11 ?Will be, one major os update and 2 yr security updates are promised

I'm guessing this won't get updated to Android 11 ?

Comparing to Moto G8, its a downgrade!!!
Even moto G4 had Full HG display!!

it is very beautiful seen .
It's color is very nice and pretty.
But whan I shall buy it ,then we'll know about it's performence

Don't see front glass mentioned as Gorilla.
Does it mean it's not Corning Gorilla ?

What is the type of storage in Moto G9? Is it eMMC or UFS? Thanks.

Hd screen mean better battery life and more fluid experience. Sd 662 is great soc, and will push everything.Price is also amazing. But, that is just for India. Let's see official price for Europe.

No Gorilla Glass display ?, and 9.2mm its bulky

Anonymous, 24 Aug 2020Already? Why make the G8 "outdated"? Also, it's darn large. like for real. C... moreG9 will be outdated next month when Android 11 will be released

Why not just put that front camera on that huge chin and call it a day?

Already? Why make the G8 "outdated"?

Also, it's darn large. like for real. Come on Motorola, I loved the first Generation of the Moto G line, why make such monstrosities now, without one single compact alternative in your lineup?

The G8 was released on April this year doesn´t even has 6 months on the market..

Holy hell, we were waiting for Lenovo Legion mobile and Moto Z5, and idjits brought in another G series.
They aren't going to survive any longer in the industry