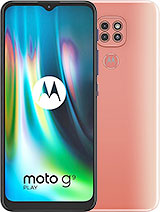 Fantastic phone - I bought it for £99 (it's even cheaper now) and it does everything I ask of it with great performance and battery life. Camera is a little low quality, but definitely good enough as long as you don't zoom in.

Anderson, 27 Mar 2022How does battery of Motorola Moto G9 Play last after update to Android 11?After all day usage the battery percentage is about 50%.

Anderson, 27 Mar 2022How does battery of Motorola Moto G9 Play last after update to Android 11?Not so bad, it covers all the day.

I use this as a modem basically, share the network to a computer with unlimited data.
Battery lasts long, phone's a bit heavy and big, 720p looks just fine on Youtube, camera is bad though.
It also seems to lose the signal from time to time, usually even multiple times a day. However, I am not sure if this is because of the phone or the 5GHz frequency I use, instead of 2,4GHz for the signal. The speed also, I have 200M network, but it has given at absolute best about 80M, usually staying around 30-50M wirelessly. Wired wasn't any better, but actually worse. Other wireless connection in the apartment is a mouse, that only. Other citizens' electrojunk might interfere in the communist box I live in.

For 69€ it was a nice deal. If and when it breaks, couldn't care less.

How does battery of Motorola Moto G9 Play last after update to Android 11?

If you do not mind about the quality of the camera (it's not the best) and the big size, then it is the best bang for the buck.

Never had a telephone with such a long lasting battery, amazing!

Really good phone for the price! Couldn't be happier!!!

chrcol, 11 May 2021Brought this phone to replace an aging Huawei Y6 2017 model. Another phone I was considering ... moreI just wanted to say thank you for such an honest review. I recently bought my G9 play after reading your review and for the money I spent on it I couldn't be happier

william, 24 Aug 2021unfortunately i agree, this model is a big disappointment for me, i replace it with samsung phone..Cool, so you replaced a $250 with a $1500 phone. Gee, I wonder which is superior.

nxio, 17 Aug 2021Never buy this plastic pile of crap, or any Motorola phones in general, I don't know how ... moreunfortunately i agree, this model is a big disappointment for me, i replace it with samsung phone..

Never buy this plastic pile of crap, or any Motorola phones in general, I don't know how on earth they manage to market and sell this garbage, I've had problems with every single Motorola phone I've owned, one had calling issues, one had horrible performance issues, and this one, has horrible performance issues, horribly inconsistent data connection problems, and the battery is already dying, due to CPU under voltage, all after less than a years worth of use, and yes, this phone is cheap, but please, just buy something like a Samsung galaxy M12 or A22

For those that may be interested, i bought one of this on Amazon some time ago, and now it updated to Android 11

john, 03 Dec 2020Just bought the G9 play but wont connect my square-even we tried with technicians. So we trie... moreSamsung which model??

Anonymous, 30 May 2021It has NFC and work when you touch it with your old phone and transfers everythingbro this phone hace NFC

and also only upgrade is the newer android

Adnan, 12 Mar 2021Yes, I brought it from extra too, I fully agree with you. Add to to what you have mentioned: i... moreIt has NFC and work when you touch it with your old phone and transfers everything

Brought this phone to replace an aging Huawei Y6 2017 model. Another phone I was considering was the Samsung A02.

Its not a flagship of course but I feel the value is immense, I dont care for gimmicks like glass back, scratch proof glass etc. But I do always rate value.

My other phone is a ex flagship one plus 6, you will see why I mentioned this soon.

So this phone comes with 64gig storage, 4 gig ram, mid range chipset, and android 10. The wifi is dual band (many phones at this price point are 2.4ghz only), It comes with a plastic cover (finally a manufacturer who gets it), and the battery seems very powerful considering the low'ish power of the chipset.

Now its not perfect, I had some issue getting rid of the assistant pre installed on the phone, I understand why its there which is fine, but I felt I had to jump through excessive hoops, ended up having to fully disable the google app, just could not find a simple on/off toggle for it. In addition the phone seems slow at i/o, certain things have clear lag, but when you repeat them they become instant, so thats not a cpu/gpu problem but a i/o latency problem. Once cached in ram no lag. Even with this in mind though its a clear performance upgrade over the Huawei I replaced it with.

Also for the traditionalists. It supports storage expansion, has a fm radio as well as a 3.5mm jack, whilst supporting these features that seem to be considered deadwood on flagship phones, it also has a modern usb-c fast charging port. The phone is nice and thick so easy to pick up albeit a bit heavy. Also is a little bit of a gap between edge of screen and edge of phone so not too easy to accidentally touch screen, a problem flagships get.

I have yet to find a way to reverse the recent and back buttons though as since my android time originated on samsung many years ago I am still used to the back button been on the right hand side. I am not sure if moto is to blame here, it could be google restricting things as google I think want to get rid of 3 button navigation, but I absolutely hate using gestures.

The bloatware is minimal compared to other vendors.

PPi is low on the display which I am absolutely fine with, likely contributes to the battery life, and on tiny phone screens, not sure why people need massive resolutions anyway, I honestly cannot tell the difference visually to my one plus 6 which has a much higher resolution. A low PPI doesnt prevent you from having a compressed UI. Its as adjustable as my one plus 6 is.

In short I do rate this phone from the value point of view, its one of the best value android phones I have ever purchased.