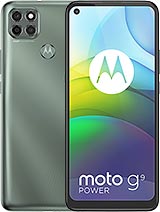 Why are they always sold out?😭

I have this phone since late 2020/ early 2021. Although it has 4gb of ram and SD662, it runs butter smooth. Camera is a bit underwhelming but it's not sensor's fault it's the old chipset who takes blurry or low res photos in low light.
Battery takes two days in 6 hours of screen time every day to empty it, 3 days if you use the battery saver.
Best 170 euros ever spent!

These were short lived.
Can't buy any. They got discounted about 4 months ago in the UK. Sold out and haven't seen them available since.
I see the old G8 power available, but that's actually not s good device.
This one has 6,000 mah. It's worth upgrading to this from my 2019 G7 Power

John Magat, 14 Dec 2020Dear motorola, I wish you have gone with 2 sim tray with dedicated sd card slot with this pho... morei agree...like xiaomi does...i had a xiaomi redmi note 9s...which i had to sadly day goodbye to in late october...it had 2 sim card slots & microsd card slot...

Anonymous, 11 May 2021what planet are you on it charges fully in 2 hours mine does anyhow2 Hours Is Still A Bit Long But Comparatively Better That's 2 Hours 45 Minutes That My MOTOROLA MOTO G POWER Takes...

Man Up...Large Display Phones Are In These Days...If I Can Handle It So Can U...U Shall Become Used To It...

jackthewolfcub, 29 Aug 2021i had g7 and g8 power both hase the same probnlem screen persistence u see ghost apps after u ... moreIt happens on a lot of phones just about all the Samsung phones do it and half the lg ones

miked, 26 Jan 2021i have a g7 power, g8 power, and g9 power. every time a new g power is released, i get it. i m... morei had g7 and g8 power both hase the same probnlem screen persistence u see ghost apps after u close it, problem is world wide if u donrt see it u r blind :)

Anonymous, 06 Aug 2021Not true. The update has apr. 2GB. The rest you had it already there , the main OS version ... morebefore update free space 110gb, after 100gb (update archive was 1,17gb or 1,7gb - cant remember exactly)...
but there is one bug (the same was with android 10), which is not solved after update:
when make call, display turn off when i take phone to my ear due proximity sensor, but when call ends sometimes display does not turn on from fingerprint and i need to use power button...

The update has apr. 2GB. The rest you had it already there , the main OS version of each phone generally takes 15GB +/- , heavier custom roms like Color OS, MIUI , ONE UI, takes even more

pr0fessor, 31 Jul 2021today i received android 11 update... i have read for battery drain in pixel phones... i am no... moreUpdate you want regret. Battery life improves even further and no bugs

today i received android 11 update... i have read for battery drain in pixel phones... i am not start to update for now... i have nokia 5 and update from 8.1 to 9 screw up my phone (camera continuously changes focus, battery drains 3 times faster ), i have to brick it and send it for back flash to oreo...

NoDigoGroserias, 29 May 2021Im planning to buy this one. Can someone tell me if it supports wifi 5.0ghz frequency? Ive loo... moreYes it does

This is phone is quite good for the prrice, but it´s large due to it´s battery. Battery life as you would expect is phenomenal. Camera takes nice and sharp pics

For thos non demanding users it´s fine and more than enough. Got it for 169€ and it already has 128GB which is great

I ordered this for my dad since I was able to find it at a good price, it's not a bad phone at all. He's not a heavy app user or gamer. It feels snappy enough and no lag from what I can tell. Got him a nice case and the phone feels good in your hands, decent weight to it.

Phone is good for a budget phone, not gonna lie, do wish for full hd on the display but for the price is ok, about the camera it can be better if you download GCAM from Nikita ver 7.4 is the best one for this phone, it will improve the images.