Motorola's upcoming midrange Moto G smartphone has been hinted at several times over the past few days, first as a phantom reference on Motorola's homepage next to the Moto X, then last night from @evleaks.

Now, we've got a fresh promo card from our own tipster, purportedly destined for a Phones4u store. 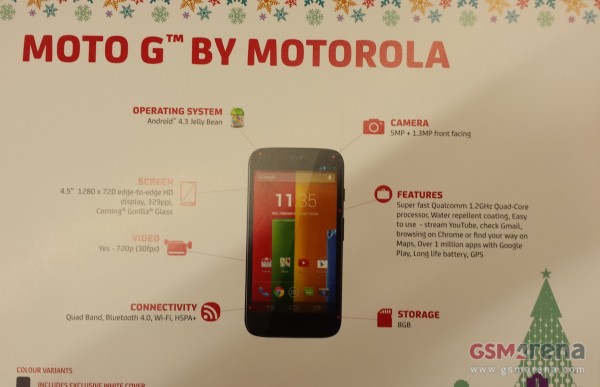 As you can tell from the image, the device is targeted at midrange smartphone holiday shoppers' pockets with a 4.5" 720p edge-to-edge display covered in Gorilla Glass and 1.2GHz quad-core CPU. There will be just 8GB of storage, a 5MP shooter capable of 720p recording with 1.3MP front-facer, Bluetooth 4.0, running Android 4.3 Jelly Bean (sorry no Android 4.4 KitKat build on release).

According to our tipster, the device will be priced at £134.95 off contract.

It's unconfirmed what sort of battery will power the Moto G, although if past leaks are confirmed it will be of the 1,950 mAh flavor.

No release date as of yet, although it certainly will be here by the holidays, and it looks like it will be heading overseas as well. Previous rumors also suggested interchangeable back panels (also hinted at in the lower left of the above image), with possible dual-SIM capabilities. At £135, the Moto G could do some serious damage at the midrange price point this holiday season.

Thanks to nerdjunkies.com for the tip!

moto g is made in chinA

Moto g is made in China or in USA like moto X?

is this dual sim or single sim?