You can't spell midranger without an M, and the Moto M is not taking linguistics lightly. Among other things not taken lightly are looks and substance (in that order), and that's where it differs from its Moto G4 siblings, which are about as exciting to look at as a rock. And not a precious stone, either. 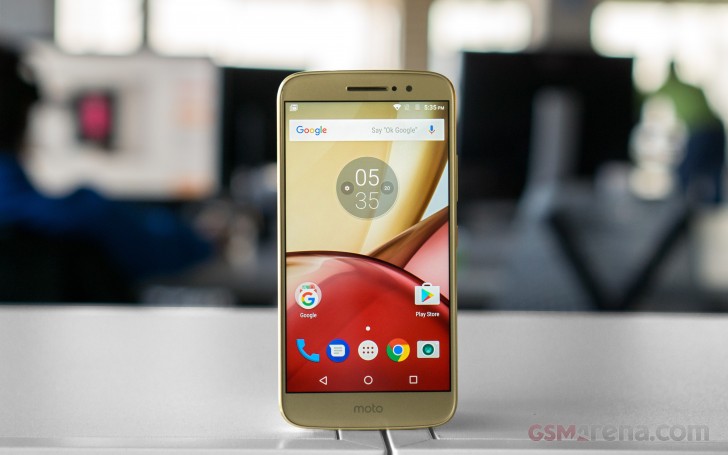 The Moto M's design formula is one that's proven successful across a myriad of makers and generations of smartphones, so if it works for them, it should work here. And it does - the Moto M is an attractive handset with an upmarket feel to it, and certainly says more than 'I'm just a tool to get things done'.

Underneath the golden veil, there's some serious hardware too - serious midrange hardware, of course. The Mediatek P10 is a proven soldier (with well-known weaknesses, but more on that later), and the India-only P15 isn't all that different. RAM and storage won't be an issue in either version and the 5.5-inch display packs pixels aplenty.

Now that pixels got into the conversation, the Moto M's primary camera has the tiniest of those, but at least there are 16 million of them. Half the number on the front, but slightly larger ones, could mean a strong selfie game. Other niceties include a fingerprint sensor and a water-repellent nano-coating - not quite water-resistant, the Moto M, but better than nothing. Oh, and there's an FM radio too, and we all know how that magic abbreviation can mean the world to some.

The Moto M's specsheet is not without oMissions either (we'll move along as if that didn't happen). You're denied near-field communication, so among other things you can forget about Android Pay - which you could also probably have never known of on account of it not being available in your country.

We've had a beef with hybrid slots, and we can see how they cater to both multi-SIM users and those that need more storage. Draw a Venn diagram though, and those folks in the middle that are the intersection of the two groups will need to look elsewhere.

And whichever bunch you are a member of, you can certainly appreciate some display protection, right? Well, there was some initial marketing confusion regarding the protective finish on the Moto M. However, Lenovo seems to have swiftly corrected the error and now Gorilla Glass protection is officially listed as part of the specs page.

Join us on the next page for the usual hardware overview.

This review is based on a Moto M review unit with a Mediatek Helio P10 chipset.