Above the display is where the earpiece and the front-facing 2MP camera reside. The ambient light and the proximity sensor are also sitting there.

Below the screen we find the single front-facing speaker. The IR sensors for the motion gestures are also located in this area.

There is nothing on the left side of the device. The power/lock key and the volume rocker are located on the right side.

The sides of the smartphone

The 3.5mm audio jack and the nano-SIM tray are located on top of the device. The microUSB port sits on the bottom.

The top and bottom of the Moto X

The back of the smartphone is home of the 13MP camera and its dual-LED flash setup. The dimple with Motorola logo from the original Moto X has been carried over as well, this time in even more premium guise. A microphone pinhole and an AT&T logo etched into the leather complete the setup of our review unit.

The back of the new Moto X

Despite the significant bump in specs and screen real estate, the battery size of the new Moto X has remained practically unchanged from the one in last year's model. This year's offering packs a 2,300mAh unit as opposed to 2,200mAh solution in the 2013 model.

A 2,300mAh battery is modest by today's Android flagship standards, so the endurance rating of the new Moto X is anything but spectacular. The handset achieved a score of 48 in our battery test. 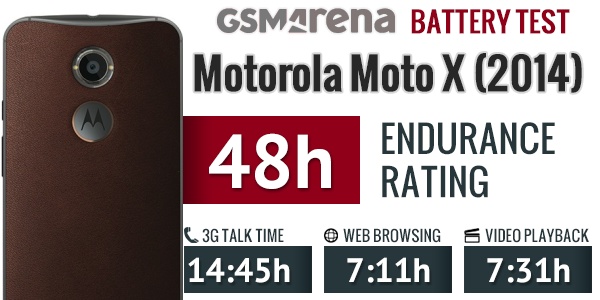 The above battery performance means that the device will make it through two days of usage is you utilize it for an hour each of telephony, web browsing and video playback daily. Heavier users can count on a full day from the device, but not much more.

Undoubtedly, the reduced battery capacity compared to today's standards is the price the new Moto X paid for being so good looking. The manufacturer aims to offset this shortcoming by offering additional accessories that include a rapid charger and a mini battery pack.

Update, Feb 20: We did our battery life test again once we've updated the Motorola Moto X (2014) with the latest Android Lollipop OS. Oddly the phone did quite different compared to its KitKat results - its 3G talk time endurance is weaker, while the web browsing and video playback scores got a noticeable bump. The overall endurance rating turned few hours better, too. 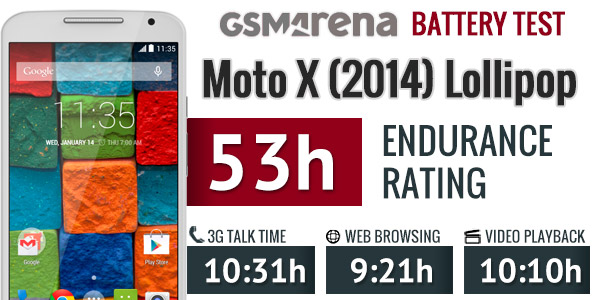 On the local connectivity front, the device offers Bluetooth 4.0 alongside Wi-Fi with a/b/g/n/ac standard compatibility. MicroUSB 2.0 port with USB host is also at hand. Positioning is covered by A-GPS and GLONASS support.

The device allows you to share all sorts of media via NFC by simply touching the device and other NFC-capable devices back-to-back.