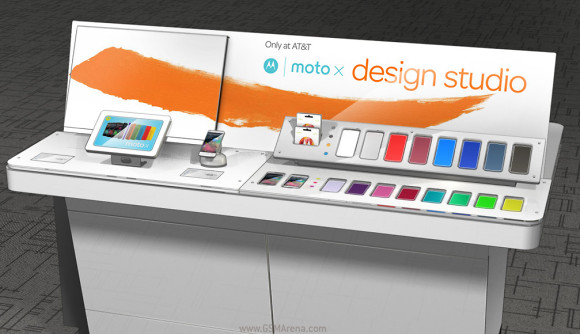 Devices that have been customized online using the Moto Maker service can expect their devices to ship on August 23 with a lucky few registered users getting it earlier on August 19.

Major AT&T stores (read not all) will have a customization table (like the one in the image) which will let you see the Moto X in its different varieties.

For a limited time AT&T will include a free Motorola Skip accessory with all orders placed via the Moto Maker. Skip is a wearable accessory, which lets you bypass the Moto X's lockscreen just by tapping the phone against it.

I think you dont get it, this is not the next "Flagship" of motorola...

You had a daily mission of coming to GSMArena and whining to no one in particular. Mission accomplished.

You've got to love how all that customization hype ended up being; You get to choose a color, memory size (small or smaller with no externalSD), and a custom wallpaper.