After leaving nothing to our imagination thanks to numerous leaks, the Motorola Moto X finally got a release date scheduled. The hotly anticipated smartphone will break cover on August 1st in New York City. 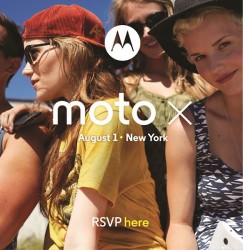 Rumored specs of the Motorola Moto X include a 720p display and a 1.7 GHz dual-core Qualcomm Snapdragon S4 Pro chipset along with 2 GB of RAM, 10 megapixel rear camera and Android 4.3 Jelly Bean. Motorola has already announced that the smartphone will be assembled in the United States.

We will be covering the Moto X launch live from the spot on August 1. Be sure to check in for the full scoop on the smartphone.

Agree. Motorola pulled out of South Africa a few months ago just as I was to get a RAZR Maxx. They need to come back. The choice of cell phone brands in this country is dismal. I simply don't want a Samsung. They are so over rated.