Ever since the Moto Z3 Play saw the light of day, a couple of months ago, it has mostly been a waiting game for the flagship model. Well, that wait is now over and the Moto Z3 is official.

The phone was announced last night at a US event and for now, remains Verizon exclusive. This time around, there is no Force moniker either. Motorola is backing out of the whole shatterproof glass campaign and has instead opted for a more conventional Gorilla Glass 3.

The compatibility to the MotoMods as we know them is still in place, too. Though that last bit is not such a big surprise because the new Moto Z3 is physically identical to the already available Moto Z3 Play.

Moto and Verizon used the opportunity to showcase a new MotoMod (still in development) which will be able to add 5G connectivity to the Moto Z3 family once the Verizon 5g network lights up for consumers sometime next year.

The Moto Z3 does come with a few specs changes. And compared to last year's Moto Z2 Force, the changes are definitely more noticeable. The entire body is directly borrowed from the Z3 Play, down to the dimensions 156.5 x 76.5 x 6.8 mm and even the weight - 156 grams. That is just slightly beefier than the Moto Z2 Force, but the major screen to body ratio improvement makes for a much more efficient use of space. Speaking of which, the large 6.01-inch, Super AMOLED display from the Z3 Play is also present. The major changes include the chipset, swapped for the Snapdragon 835, in the Moto Z3 and the camera. The latter is definitely tweaked, but not necessarily better. But, more on that later.

For Verizon, the carrier agenda obviously comes first, which is why the 5G step on the roadmap soaked up a lot of spotlight at the Moto Z3 unveiling event. In fact, it kind of feels like Verizon jumped on the opportunity to showcase a 5G device upgrade path, even if one isn't quite feasible yet, considering the rushed and rough, unfinished status of the 5G Moto Mod. That being said, the message was loud and clear - Verizon will be the first to launch a 5G residential service in the US, followed by a 5G mobile solution, sometime in 2019. 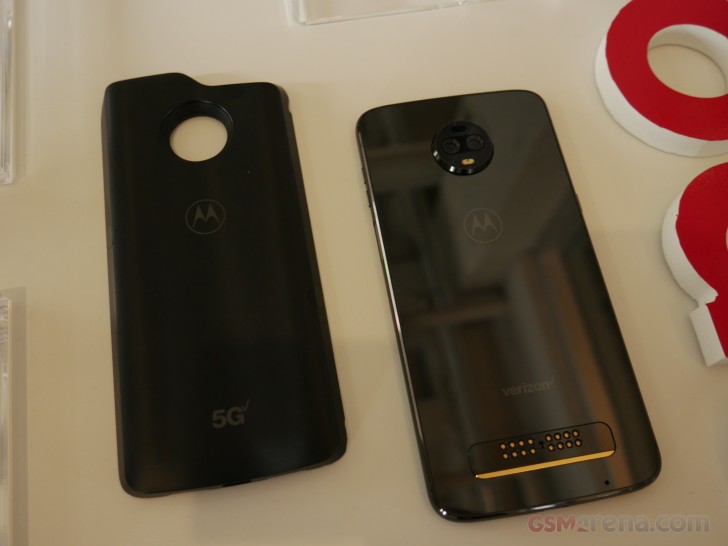 The exact release and expansion schedule is still unknown and so is the pricing and availability of the 5G Moto Mod. But having an actual physical device and 5G connectivity solution, janky or not, in hand, at an announcement event, definitely makes for a more impressive promise of future intentions.

With 5G upgrade capabilities aside, join us on the following pages where we'll get a better look at the Moto Z3.

This company cheat customer and there services are very bad.unprofessional person are hired at service centre . according to my experience this company is full of thief's so do not buy it.

OMG! is this an upgrade to the Z3 Play? If so, then this is truly awesome! but, hope this will reach in the Philippines. I'm so confused what phone to get now. But I'm still loving my daily driver Moto Z play and Droid RAZR.

The WHOLE point of the devices in the Z-series is the Mods... Actually you get the versatility of one day having a slim device for the 'dinner jacket' with the build in battery AND another day after clicking on a battery pack for more demanding ...