We really like how well the Moto Z4's display looks with this OLED display. Granted, this one does have the "micro-notch" as Moto calls it, but it only houses the front camera so it is only minimally obtrusive. In any case, the larger 6.4-inch screen fills the footprint of this phone very well. We think anything larger than a 6.4-inch. Last year's Z3 had a Super AMOLED display but Motorola says the Z4 has an "OLED" panel - so we're not sure who the maker of this panel is - chances are it may not be Samsung but LG or BOE.

Even so, we saw identical brightness scores between the Z3 and the Z4. The Moto Z4 reached a max brightness of 458 nits and achieved an even higher 645 nits with adaptive brightness enabled so you'll have no problems seeing this display when out and about under direct sunlight.

Colors on the display are as conventional as they get. There are three color profiles to choose from, but there is no way to further tune any of them. The default profile is "Saturated" and there are two other profiles with less intense saturation. "Boosted" is still a bit saturated with "Natural" as the least saturated profile.

All profiles have a bluish tone, which is more appealing to the eyes but over longer periods of time can lead to eye strain. The built-in Night Light helps eliminate exposure to blue and white light such as before going to bed. Interestingly enough, since there is no fine tuning of the color profiles, we found the most color-accurate profile to be the "Natural" one, but when used in conjunction with the Night Light, about one-third of the way on the tint slider. This was able to balance out the blueish white to near-accuracy. With this, we got a much more accurate average deltaE of 2 and max deltaE of 3.8 @ reds.

We have no major complaints with this display - it's got great viewing angles and vibrant colors. The OLED display is a welcome choice for a midranger with those deep black and bright colors. Even sunlight legibility is very good.

The Moto Z4 sees a bump in battery capacity over the Z3 - which had a 3,000 mAh battery. There's a larger 3,600 mAh lithium-ion battery, but there's also a larger 6.39-inch screen which consumes more power. Although the individual scores were about the same, the overall score of the Z4 takes a hit. The Moto Z4 managed an overall score of 70h. While testing the Z4, we saw a strong call time endurance of 29:38h which was well improved over the Z3. Web browsing took a minor hit to 9:43h and video playback was quite good at 14:56h.

Although not shown in our calculations, the standby score is what affected the overall score so much. The Moto Z4 doesn't have very good standby endurance since it is essentially always awake - waiting for the user to perform a Moto Action or wave to wake Moto Display. 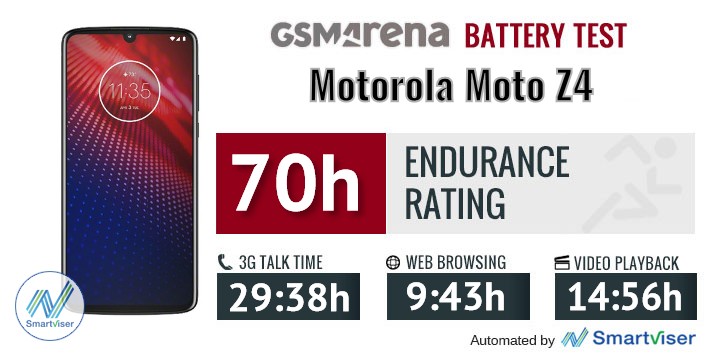 This is where we have to remind our readers that our tests are purely objective and don't represent all the facotrs of real-life endruance. The battery test didn't work in the Moto Z4's favor, but we did see reasonably great real-life battery endurance. The phone can certainly last you through the day with a good amount of percentage left over with moderate use. If you receive many notifications, maybe tweaking the Moto Display settings could add more endurance.

Our battery tests were automated thanks to SmartViser, using its viSerDevice app. The endurance rating above denotes how long a single battery charge will last you if you use the Motorola Moto Z4 for an hour each of telephony, web browsing, and video playback daily. We've established this usage pattern so that our battery results are comparable across devices in these basic day-to-day tasks. The battery testing procedure is described in detail in case you're interested in the nitty-gritty. You can check out our complete battery test table, where you can see how all of the smartphones we've tested will compare under your own typical use by adjusting the ratio of the three types of usage as you prefer.

Since the first Moto Z, the loudspeaker has always been front-facing as it was the same speaker that was used in calls. For the Z4's near-bezel less display, Motorola had to move the loudspeaker to an upward firing position. 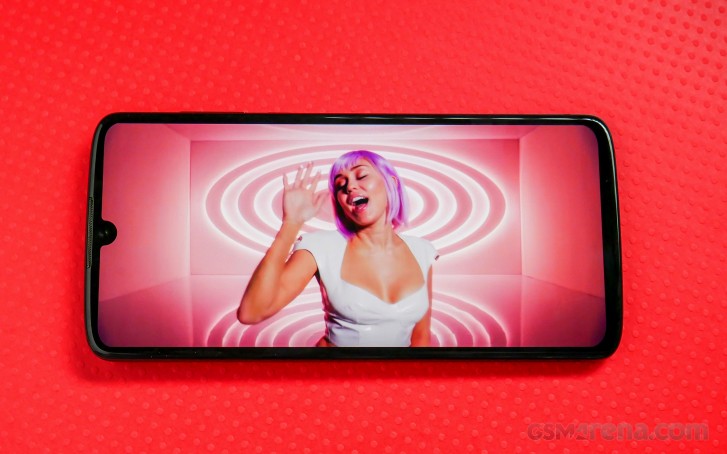 It isn't very common for a loudspeaker to be up at the top, but we didn't really find it to be an issue. Of course, after using phones like the OnePlus 7 Pro and the Google Pixel 3a XL, both of which have dual stereo loudspeakers with fuller sound, the Moto Z4 feels like an immediate downgrade. The loudspeaker is easily covered when holding the phone in landscape with the top pointing left.

Still, the speaker was amply loud for alerts and ringtones. It scored a Very Good rating in our loudness tests. Due to the relocation of the speaker from space constraints, this loudspeaker is not as loud as the Moto Z3's. Meanwhile, music and videos sound very tinny at higher volumes.

The Motorola Moto Z4 did impressively in our audio quality test. It was among the loudest smartphones out there both with an active external amplifier and with headphones. Its clarity left little to be desired too.

The scores were perfect in the first part of the test, and plugging in our standard 32ohm headphones only caused a relatively minor spike in stereo crosstalk. Certainly the Moto Z4 will please even demanding audiophiles with that kind of performance and should allow the use of higher-impedance heaphones with ease.