Verizon has started pushing out a new update to Motorola Moto Z Droid and Moto Z Force Droid smartphones on its network. It's a major update that brings along Android Nougat OS version 7.1.1. 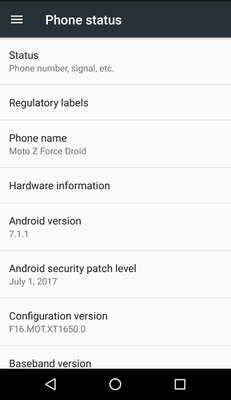 Aside from the bump in OS, the update also includes Android security fixes for the month of July - the security patch level says July 1. As is usually the case with OTA roll outs, it might take some time for the update notification to pop up on your handset's screen.

The battery drain has increased and phone hangs up after long use.The cameracrashes if you take a lot of selfies in a short time

I have it already... good update