Motorola has recently acquired a taste for weird form factors - you've already seen the Motorola BACKFLIP, now get ready to meet the Motorola MOTOSPLIT. It runs on Android OS and strongly resembles the Nokia 6800 and the series of similarly shaped Nokia handsets culminating in the Nokia E70. 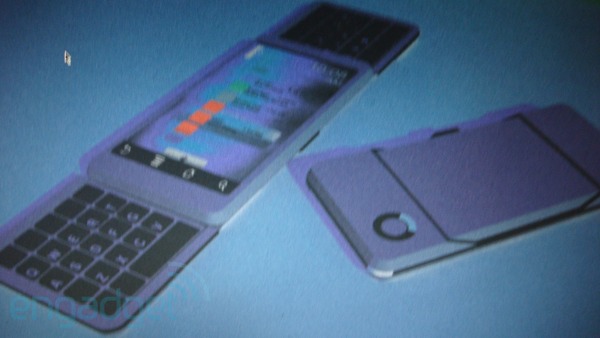 The "photo", if we can even call it that, seems to be of projected image of a rendered Motorola MOTOSPLIT but our guess is that the two halves of the QWERTY keyboard don't flip but slide open. The MOTOSPLIT name seems to support that theory too.

If you haven't guessed from the photo already, the Motorola MOTOSPLIT runs Android. The CPU is a 1GHz Snapdragon, which is becoming quite popular in Android handsets these days but is a first for Motorola. Anyway the company has certainly set its mind on establishing itself as a big player in the Android world, they might even be the ones to make the Nexus Two.

The Motorola MOTOSPLIT is expected to arrive at AT&T's doorstep in the third quarter of this year.

weird? From the days of the "first" mobile phones like DynaTAC? Yeah, weird phones like MicroTAC, StarTAC, V3688, V3, are so "weird" because nobody else was able to make anything similar with such success. Oh, I almost forg...

Wonder what the durability is with this design.