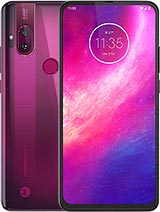 Anonymous, 05 Dec 2019Is the 'Motorola One Hyper' an Android One phone? No its not. "MotorolaOne" naming is just a marketing term for this current gen lineup. The only android one phone was the Moto one action international version which is ironic that the US version is not. But yea Motorola is not under any obligation to provide software os updates for this lineup.

Just a reminder for everyone to remember that motorolaOne is not androidOne. Motorola one is a lineup name. Androidone is a contractual obligation with google to provide 2yr os updates and 3yr security updates. Disregard the troll responses that say otherwise.

Black is the single most sought after colour ever! How come they don't offer it? Coloured phones are always lingering in the stocks, nobody buying them and selling for reduced prices, while black models always sell first. They're out of their mind with these garbage colours, you have to be either a kid or a pimp to appreciate them.

Also, notification led on the back? Should I put my display on random surfaces and destroy it so I can see the led? The led ring is cool and stuff, but I need to use my phone, not hang it in the christmas tree.

Poo, 08 Dec 2019Flick off with the damn pop up camera shit already nobody wants thatDo you like notches and holes that much? Just put some stickers on your display if you like parts of it missing.

Anonymous, 05 Dec 2019Is the 'Motorola One Hyper' an Android One phone? Lmao what else would it be? An iPhone? Man I see why you're confused. There's a whopping 2 whole operating systems for it to run! Hahahahaha.

sohail shafayat, 05 Dec 2019I have a humble argument. Most devices these days come with 19.5:9, 6.4". Which is equivalent ... moreBruh. Taller screens are better for browsing, not wider ones. And you're seriously complaining about an inch more in height. Height, the dimension that doesn't affect your ability to hold your phone at all. Your argument is so pointless.

Joem, 04 Dec 2019When you read in the cell phone's name the word "HYPER", you expect something "HYPER", I don't... moreLOL, I get your point. IMO, the word "Hyper" would mostly refer to its ultrafast charging (45W).

Is there any protection for the phone

Anonymous, 05 Dec 2019Is the 'Motorola One Hyper' an Android One phone? Yes, dude. It's clearly written in the phone's specifications. Also it will come with Android 10 out of the box.

change your designer for better brand

Is the 'Motorola One Hyper' an Android One phone?

Everything in the "optional" category will be classified as a luxury and will cost more even if the actual production cost is the same.

Total of 185 user reviews and opinions for Motorola One Hyper.
ADVERTISEMENTS