Motorola One Hyper is available in Europe

The Motorola One Hyper made its debut in December and originally launched in Brazil and the US. Now, Moto’s first phone with a 64MP main camera and a pop-up selfie cam is available on the Old Continent as well.

You can find it on Lenovo’s UK site for £270 and in the Netherlands for €300. It’s also available through Dutch retailer Belsimpel, though the same 4/128GB model costs €330 there. 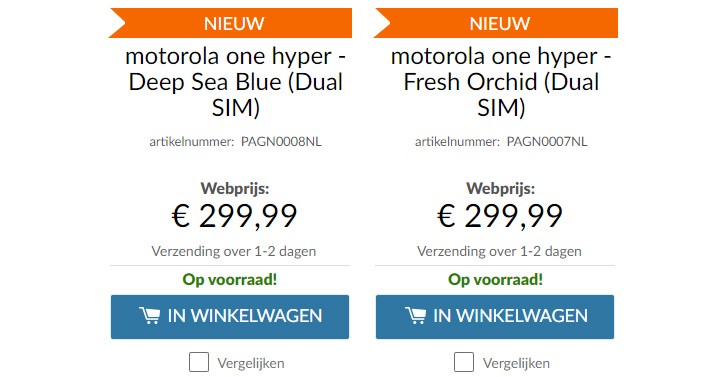 We also found the One Hyper on Lenovo’s German and French sites, though availability is limited – there are only a few units of the phone painted in Fresh Orchid and the Deep Sea Blue is completely out of stock. The good news is that once the stock is resupplied, you can have one for €300.

Is go for the Moto zoom any day. Same specs but I'd get an amoled screen and more desirable set of cameras . Don't know the purpose of this phone but seems rather useless. But ok half way the G8 plus and the zoom...ok

It is positioned just above the moto g8. For a bit more you get a better camera, faster SOC and no notch. Not a bad deal I'd say.