Motorola One Hyper launch imminent as it bags NBTC certification

We've been hearing about Motorola's first pop-up selfie camera smartphone since early September, which will be called One Hyper. There's no word from Motorola about the One Hyper yet, but it seems the smartphone will go official soon since it has been NBTC certified in Thailand.

The NBTC listing doesn't reveal anything about the One Hyper other than its model number, which is XT2027-3. But, thanks to previous leaks, we know what the smartphone will come with. 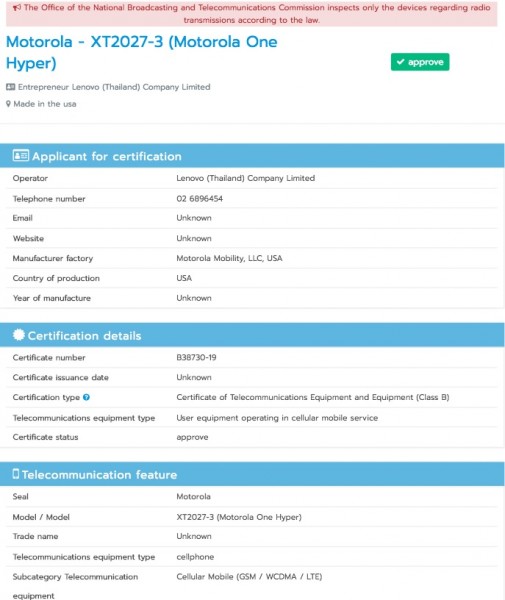 The One Hyper will sport a 6.39" notch-less IPS LCD having FHD+ resolution. Under the hood, it will have a Snapdragon 675 SoC with 4GB RAM and 128GB storage. The smartphone will pack a 3,600 mAh battery and boast a fingerprint reader on the back surrounded by an LED ring.

Keeping company to the fingerprint scanner will be a dual camera setup comprising of a 64MP main and 8MP depth sensor units. For selfies and video calls, you will get a 32MP camera mounted on a pop-up mechanism.

Motorola is holding an event on November 13 in Los Angeles where it will unveil the foldable RAZR 2019, and it's unclear whether or not the Lenovo subsidiary will announce the One Hyper at this event.

The one vision is priced for about $280 where I live. For that money I can get a Xiaomi Mi Note 8 which is better

The Motorola One Action & One Vision - are disappointing products, because of the Punch Hole Selfie camera... They are one of the rare few Android One Phones, but unfortunately punch hole camera was a bad decision , else I would have bought...