Last month specifications of an unknown Motorola smartphone, said to be the Moto G8 Play, surfaced. Now we learn it's the One Macro and not the G8 Play.

The same source who leaked the specs has now leaked a live image of the One Macro which confirms the phone will sport a notched display, thick chin, and a purple-colored power key and volume rocker on the right side. 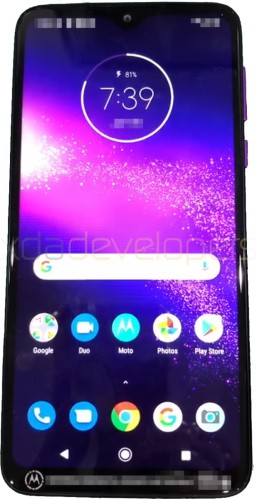 The One Macro also passed through Geekbench revealing key specs - Helio P60 SoC, 2GB RAM, and Android Pie. The smartphone achieved a score of 1,429 and 5,584 points in Geekbench's single and multi-core tests, respectively. There's no word from Motorola yet about the One Macro, but the smartphone recently got certified by Thailand's NBTC, hinting at an imminent launch.

What nonsense is Motorola upto, launch one single phone with all lenses and sell it at competitive price.ita simple why making complicated.

Lenovorola Macro, Micro, Hybrid Zoom, Maxi, One one one... The "premium brand" of mid-low range phones! Pay premium, get a mediocre thing ^^