IPS LCD with a punch hole

The One Vision comes with a good old IPS LCD panel but with a twist - a punch hole camera in the upper left corner. The hole itself is the biggest one we've seen so far and when you add the dead space between it and the edge it wastes as much time as a waterdrop notch. The good part is that the corner rarely is as populated with UI elements as the middle, but the bad part is that it hurts symmetry.

We also discovered two more minor issues with the punch hole. The software cuts off a good chunk of the UI in most apps and it can also get in the way of some content. Secondly, there's a noticeable light bleed around the circle as well as around the bottom bezel. 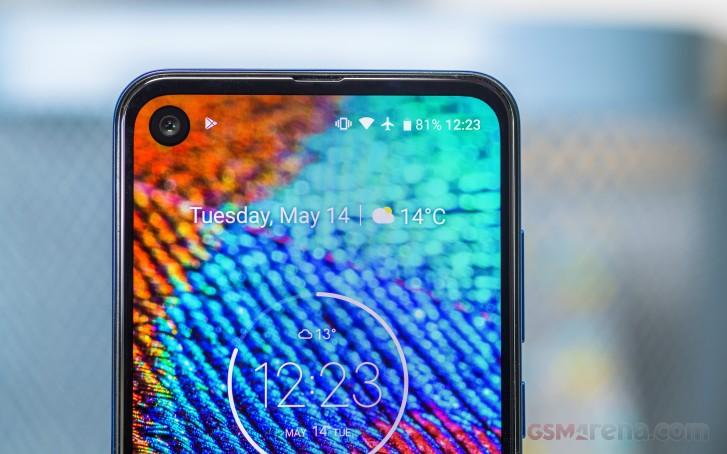 However, the display offers a sufficient 1080 x 2520 pixel resolution in a 6.3-inch diagonal. The key selling point of the handset is the said 21:9 cinematic aspect ratio. Not all content on Netflix and YouTube is shot on 21:9 but it also comes in handy when using the split-view or even if you are just scrolling through social media feeds.

In terms of image quality, the screen doesn't impress with particularly accurate color reproduction no matter which mode you choose - natural, boosted or saturated. The average dE2000 is between 5 and 6 for all modes. Expect blue-ish whites and a bit oversaturated colors.

Maximum brightness, on the other hand, is good enough for normal usage on a bright sunny day. We've recorded 464 nits of maximum brightness and in Max Auto mode, the screen peaked at 486 cd/m2. Not a big step up but we did notice that the contrast is dynamically adjusted and thus makes the content more visible under direct sunlight.

A 3,500 mAh battery powers the One Vision, while its Exynos 9609 chipset is built on the efficient 10nm node. It's not particularly fast chipset but it does the job well in for the asking price and the four small Cortex-A53 cores should keep the energy consumption to a minimum.

To our surprise, though, despite the clean Android iteration and effective SoC, the One Vision's battery life isn't overly impressive. The off-screen tests were okay but when it comes to web browsing and video playback, the scores are pretty underwhelming. The overall endurance rating is just 67 hours and falls short to many competitors in the price range. 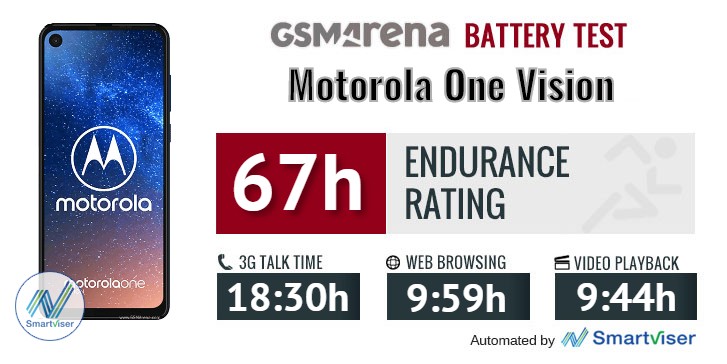 Our battery tests were automated thanks to SmartViser, using its viSer App. The endurance rating above denotes how long a single battery charge will last you if you use the Motorola One Vision for an hour each of telephony, web browsing, and video playback daily. We've established this usage pattern so that our battery results are comparable across devices in the most common day-to-day tasks. The battery testing procedure is described in detail in case you're interested in the nitty-gritty. You can check out our complete battery test table, where you can see how all of the smartphones we've tested will compare under your own typical use.

In our charging speed test, the 15W TurboPower-capable charger, which is just an implementation of Quick Charge 3.0, the phone recovered 38% in 30 minutes. It's not the snappiest around, but it's not the worst in the class either.

The handset has a single bottom-firing speaker that can get pretty loud so you don't have to worry about missing a call in a loud environment. However, the positioning isn't optimal when watching videos due to the direction of the sound.

There are a couple of presets in the audio section under the Dolby Audio sub-menu but we found little to no difference when it comes to loudness. It could affect, however, the listening experience when watching movies or listening to music.

The Motorola One Vision’s audio output has excellent clarity both with an active amplifier and with headphones. All the scores were perfect in the first case and our standard 32 ohm only caused a small hike in stereo crosstalk.

However, loudness was rather disappointing in both tests so if you have higher impedance headphones you might struggle to achieve very high volume levels. Whether the phone works for you really depends on how loud you drive your headphones normally then.