Motorola has been flushing out its "One" lineup pretty steadily over the last few months. Just like it's sibling, the One Zoom is pretty aptly named. It's spotlight feature being the 8MP, OIS-enabled telephoto camera. But that is far from the only alluring bit about the Zoom. It clearly stands-out amid the rest of the "One" family in terms of overall specs.

Beyond a versatile camera setup, the Zoom also offers a Super AMOLED screen instead of an LCD, complete with a trendy under-display fingerprint reader. A big 4,000 mAh battery with 15W fast charging is also part of the mix. So, as far as Motorola One devices go, the One Zoom is the cream of the crop.

Motorola ranks look a bit confusing at this moment. The Moto Z4 is supposed to be their flagship device, yet the One Zoom could even be considered better in a few departments. The One Zoom is arguably the best Motorola has to offer so far in 2019. While this might sound like criticism on the surface, it really isn't - we're just hoping to put the phone in the right context.

With expectations set accordingly and a better understanding of where the One Zoom fits into Motorola's current lineup, we can dive into the review. Starting, of course, with a quick tour of the retail package the phone ships with.

In typical Motorola fashion - this one doesn't have anything too fancy in terms of packaging. It's just a sturdy, two-piece cardboard box with excellent internal support and layout and a recognizable blue color on the outside. 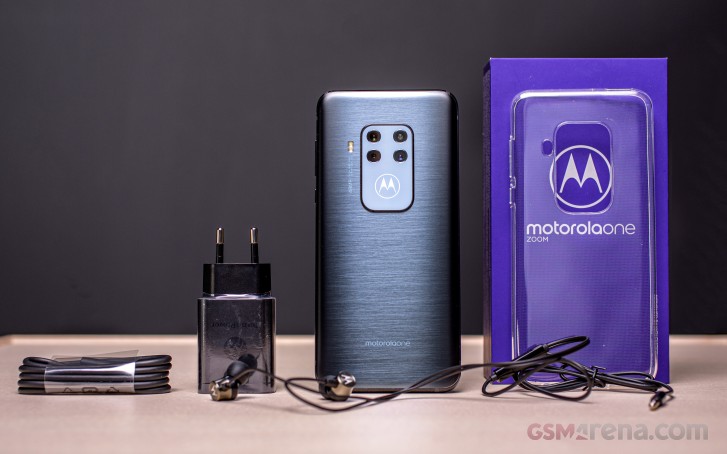 The actual accessory bundle of the One Zoom is surprisingly rich. You get a nice and thick, rubber transparent case right in the box. There is also a pair of headphones. The bundled charger is one of Motorola's Turbo Power units. It is perfectly capable of providing the full 15W the phone can accept even if it is a bit outdated now with its guts mostly based on Quick Charge 2.0. You can also use any other Qualcomm Quick Charge 2.0 (or newer) charger to top off the One Zoom at full speed. And as far as chargers go, these are probably the most abundantly available in general.

That also means that you don't need anything other than a standard USB Type-A to Type-C cable for the One Zoom. The one that Motorola bundles in the box is quite nice and sturdy. No complaints at all.

Are you kidding? Stock Android is the best. This phone isn't lagged down by an annoying skin like samsung s series. It also already has the newest version of Android thanks largely to the limited altered UI. It makes it nearly as quick as a fla...

I virtually love everything about The Moto One Zoom BUT I'm not much fan of stock android @all. I was already planning of obtaining the phone but got discouraged when I found out about the stock android on it after watching the review. I wish Mo...

On the top of the phone above the camera